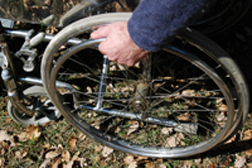 According to the West Virginia Record (11/19/13), Denzil and Cathy Shaw had purchased a credit disability insurance policy. That policy, which was sold by Beneficial West Virginia Inc and issued by Household Insurance Company, reportedly stated that if either of the plaintiffs became disabled, their mortgage would be paid for up to 180 months.

In 2009, the lawsuit claims, Denzil Shaw became permanently disabled and the disability claim was approved. The claim was terminated, though, in December 2012, well short of the 180-month limit. The Shaws filed a lawsuit against both Beneficial West Virginia Inc and Household Insurance Company, citing breach of contract, bad faith insurance and failure to disclose.

The lawsuit, which has been removed to federal court and seeks class-action status, is case number 2:13-cv-28470.

Meanwhile, a student who broke his ankle at basketball practice while he was restricted from playing has filed a lawsuit against an insurance company and a board of education. The West Virginia Record (11/25/13) reports that Cody A. Miller had a broken nose at the time of the accident and was not supposed to play basketball but was allegedly required to attend practice and demonstrate a technique. During the demonstration, Miller reportedly broke his ankle.

The lawsuit filed against Security Life Insurance Co. of America claims that the company has in bad faith refused to pay Miller’s medical expenses that resulted from the accident. A lawsuit was also filed against the Jackson County Board of Education, alleging the board was negligent in allowing Miller to practice when he was restricted from playing.

More DENIED DISABILITY INSURANCE News
When insurance companies unreasonably deny or delay payment on a legitimate disability claim, the policyholder or the insured may be able to file a lawsuit alleging bad faith insurance. Insurance companies have a responsibility to operate in good faith and to only deny claims for legitimate reasons.

And while denied disability claims are a concern for policyholders, those who rely on Veterans Affairs for their disability insurance reportedly face an uphill struggle of their own. According to the Marine Corps Times (12/3/13), a review by the VA Inspector General found error rates in disability claims that were as high as 66 percent. This means that there were errors in two-thirds of claims involving post-traumatic stress, traumatic brain injuries and in cases where veterans were seeking to be rated as 100 percent disabled. One widow, according to the article, has been fighting for more than 20 years to receive benefits, including reportedly having her claim lost and allegedly having errors made on the claim by the VA.
READ ABOUT DENIED DISABILITY INSURANCE LAWSUITS

Posted by
Denise Williams
on January 1, 2014
My son has gotten SSI since he was a child because of certain emotional impairments, a few years after he turned 18 SSA sent a letter stating that he no longer qualified for SSI, because he turned 18 and was no longer disabled. I appealed the decision, and his payments continued until just over a year ago (he'll be 23 in August 2014) then they were discontinued and now SSA is trying to collect the payments he received while his case was under review, some $18,000. They say he is no longer disabled, however nothing in his diagnoses has changed, and he is unable to gain or maintain employment because he only has a 10th grade education.
I really need help trying to get his disability back. I am disabled myself (physically) so my finances are limited. Any information or advice you may have to offer would be greatly appreciated.
Thank You.
Denise Williams