Unum: You Win Some, You Lose Some

While you rarely hear about it, the fact remains that in some cases an insurance company that denies an insured short, or long-term disability benefits sometimes gets it right. To wit, a federal magistrate in Michigan earlier this month determined that Unum Life Insurance Company of America was within its rights to discontinue disability benefits after two years, noting that the plaintiff's wrongly denied disability claims were not credible. 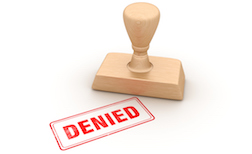 According to Court documents the plaintiff in the denied disability lawsuit claimed that he could no longer undertake his occupation as an anesthesiologist due to physical injuries he allegedly suffered from a fall after consuming alcohol.

In this case, the judge sided with Unum that benefits should cease


However Unum, having initially approved disability benefits to the insured, cut those benefits off after two years, claiming that the overriding reason why the plaintiff wasn't able to work had to do with depression, bipolar disorder and alcoholism - having little to do with the fall that caused a head injury to the plaintiff.

To that end, the judge decreed that the plaintiff had not sufficiently demonstrated that hearing and balance issues allegedly stemming from the injury effectively prevented him from working, whereas various issues pertaining to his mental health had been well-documented in his medical records.

In the plaintiff's wrongly denied disability claims lawsuit, it was noted that a doctor had testified on the plaintiff's behalf that he was no longer qualified to work in a Level II trauma center due to hearing issues. However, Judge Ellen S. Carmody ruled the plaintiff had failed to demonstrate in any compelling fashion that he would be unable to work in a 'regular' occupation as defined by his policy.

"Simply put, in the aftermath of his April 2013 head injury, plaintiff's long-standing alcohol dependence and depression/anxiety increased to disabling levels, as evidenced by his subsequent suicidal conduct, increased alcohol consumption and psychiatric hospitalizations and ongoing mental health treatment," Judge Carmody said, in her order. "Plaintiff's arguments to diminish, if not altogether ignore, his severe emotional impairments are unpersuasive."

The case is O'Neill v. Unum Life Insurance Company of America, Case No. 1:16-cv-01061, in the US District Court for the Western District of Michigan.

In a separate case, plaintiff has another chance to appeal her denied benefits


According to Court documents, Unum was found to have given one set of reasons when initially denying the plaintiff's disability claim, only to offer a somewhat different explanation as to why her benefits were denied during the plaintiff's appeal. Judge Marco A. Hernandez, of US District Court for the District of Oregon, determined that in view of such divergence of information on the part of Unum, the plaintiff would have another opportunity to submit additional evidence in support of her claim that she is correctly disabled and rightfully entitled to benefits.

However a judge determined that her reasoning for pursuing anonymity was not sufficiently compelling. Be that as it may, with Unum's eleventh-hour shift in its explanation as to why the insurer denied the plaintiff benefits, a situation was created whereby the plaintiff's attorney did not have sufficient time to respond to the new information. Thus, the plaintiff can have another go at it.

The bad faith insurance lawsuit is Gary v. Unum Life Insurance Company of America, Case No. 2018 BL 84854, US District Court for the District of Oregon, and No. 3:17-cv-01414-HZ, which is an order partly granting summary judgment to plaintiff dated March 12, 2018.