Your Swimming Pool Filter is a Bomb Warns California Attorney 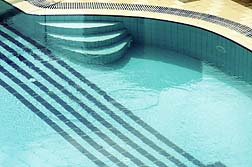 One of the calls on this particular morning is from the family of a man who is still in the emergency ward. "I guess he is pretty badly injured since he is still at the hospital," says Lancaster, an affable and engaging man who probably knows more about product liability and pool filters than almost any other attorney in the country.

Another one of this morning's calls was from a woman who has bruises and loose teeth after the filter blew up and threw her against the garden wall. There was also was a call was from a man with a four-inch gash in head. These are the lucky people.

"I represented a man a few years ago who owned his own fiber optics company," says Lancaster. "The pool filter exploded, he was thrown backwards on to the pool deck and suffered a brain injury and had to quit working," says Lancaster. "I also did a wrongful death case for the family of a man who was killed. He was leaning over the pool filter to check the pressure gauge and he was killed when it blew up."

What on Earth is this Guy Talking About?
Lancaster is talking about the everyday garden-variety cartridge pool filter system or two-part "clam shell" pool filter system manufactured by Hayward or Pentair and others. "All of the manufacturers make one of these two part or clam shell style pool filters," says Lancaster. "There is a bottom piece and top piece. They look like bells. Then there is a bellyband that fits around it like a belt on a pair of pants," he adds. "Those are dangerous types."

As pool owners know, the filter system has to be cleaned about twice a month.
The cardboard filters have to removed, hosed down and put back in and then the
tank has to be pressurized again. That's where things get tricky.

"Manufacturers want consumers to think the filter is easy and safe to use," says Lancaster. "If you look at any ad for a swimming pool filter it has some babe in a 2 piece swimsuit and she is all wet and she is smiling and she is having the time of her life but it is really a bomb."

"Sudden Separation"
Although the cleaning the filter requires few tools and a seemingly small amount of know how it, however is very easy to get it wrong. Leave too much air in the tank or have the bellyband seal slightly wrong and disaster can strike. "Then comes the moment the industry calls sudden separation because explosion sounds too dangerous and the lid blows up in the air," says Lancaster.

Manufacturers made a few slight changes to the system a few years ago, but making changes that would make it safer would also make it more time consuming for pool owners.

Confidential Settlements
The litigation process almost always ends with a confidential settlement according to Lancaster who has handled as many of these cases, if not more than any attorney in the US. "We litigate these things and they keep getting settled with confidentiality agreements," says Lancaster. "I think it is more profitable to hurt people than it is to fix these things."

A veteran trial lawyer and attorney with the highly regarded Veen Firm in San Francisco, Lancaster says he would be very happy if he never had another phone call about someone tragically injured in their own backyard because of a cartridge pool filter system accident. But that seems unlikely. A redesign might mean it would take longer to clean the filters, or require special tools or even special knowledge to clean the pool for the weekend.

More Defective Product News
"I would be very happy if I never had another case like these and there will be a lot more Dads able to go with their kids to soccer, rather than kids going to the rehab hospital to visit Dad."

In the meantime, be careful out there. That filter system might be loaded.

Posted by
Catherine Schwarts
on July 26, 2016
Hi! This article is on point with my pool. My question is. We have a 4 system filter and its inside a huge tank. The tank did not explode. Wouldn't the whole tank have exploded? The guy who built our pool is coming out today but I don't trust him. He will prolly say we have a leak to get money from us. It couldn't have been a leK! I left for court (yes I'm an attorney too) the pool was full came home around 6 and it looked like a tidal wave had occurred! The pool almost completely empty, water everywhere even I high places. A tall trash can near the pool was completely full of water. If it is the filter and since no one was injured can I go after the manufacturer to get them to pay for the filter? Can I do anything at all since Noone was injured? Thanks!
Posted by
Jon Loughboro
on May 4, 2016
My next door neighbor's pool filter blew off (separated) and went 30 feet in the air, then landed on my roof and broke 5 or 6 cement tiles. Fortunately nobody was hurt, but my children often play on the side of our house... it could have landed on them and caused real injury.
Posted by
Woody Fox
on April 9, 2016
A pool filter blew up while i was letting the pressure out of it landing me in ICU for five days with multiple breaks in my left arm , five broken ribs , collapsed lung ,hernia , heart damage. A very pain full experience. The insurance company wont pay for anything until the lawsuit is settled . So i had to go on wellfare to take care of my medical issues. How long do theses lawsuits take.
Posted by
nicole weaver
on September 30, 2015
pool filter exploded this week and could have easily killed me. We were lucky we were home or all the water in the pool would have been all over the yard as the pump turns on automatically twice a day.
Posted by
anthony orem
on September 14, 2015
Just got home from the hospital. A pool filter blew up on me earlier today and broke my jaw... Do i have a case and how do i go about it
Posted by
Lisa Shipley
on August 13, 2015
I went home at lunch today to find my filter had exploded and was pumping all the water out of our pool! Thank god it didn't hurt anyone because it blew a whole in the side of the house and broke cement roof tiles!

Posted by
John Roddie
on October 26, 2014
I had a pool filter blow off today and throw me back into a nearby by Bush. I am almost 76 years old and it's a wonder I did not have a heart attack because it caused me extreme shock.
Posted by
Jim
on August 24, 2014
Pool filter just blew up today on my 15 year old son, broke his arm and lacerated his hand. Chemical burns face and upper body. Added chlorine turned on pump and heard loud hissing and went to look at it when it blew up. Luckily other people there to help.
Posted by
Jackie
on July 22, 2014
I recently had a pool filter explode one me. I spent 3 days in hospital, with a partially collapsed lung, contusion on my heart. Also cuts on eye and nose as well as an extreme black eye. I am still on pain meds round the clock and not able to anything. I do live in Arizona and suggestions would be helpful
Posted by
jim rupe
on December 14, 2013
please contract me, a pool filter blew off and almost kill me. I need help to take the filter company to court.
thank you