Product liability lawyers in Texas have taken the case of Wayne Bishop, a Tyler resident who claims that the Healon D Opthalmic viscosurgical device (OVD) caused dramatic swelling in his eyes that required corrective surgery. 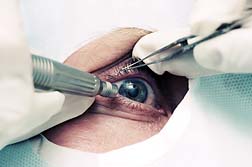 Bishop was undergoing cataract extraction surgery in late 2008 when the OVD syringe was used. Following the surgery, Bishop's eyes began to swell dangerously – ultimately requiring a corneal transplant and graft surgery five months later, according to the Southeast Texas Record.

Two days after Bishop's first procedure, Advanced Medical Optics issued a recall on the OVD syringes, claiming that the elevated levels of endotoxin found to be present on the product could lead to eye inflammation or Toxic Anterior Segment Syndrome in patients undergoing eye surgery.

Bishop accuses the manufacturer of negligence for not adequately testing its products or warning physicians of the risks of using the OVD syringes.

"Safer alternative designs were available that did not involve the use of toxins potentially dangerous to patients and which would be safe, effective and financially viable," states the official complaint, as reported by SETexas.com.
READ ABOUT INJURY LAWSUITS

If you or a loved one have suffered losses in this case, please click the link below and your complaint will be sent to a defective products lawyer who may evaluate your Injury claim at no cost or obligation.
Request Legal Help Now