Remember bisphenol A? The bad stuff in plastic, such as athletic water bottles and baby bottles that were thought to leach out. Some scientists say that the amounts are so miniscule, there is no cause for alarm. Others suggest that even trace amounts are too much. Some countries, and some States have banned the use of bisphenol A in baby bottles, and families by the millions the world over have been tossing out their plastic baby and water bottles. 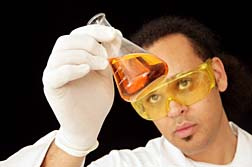 Some are even re-thinking the food they buy in cans, as some cans lined with plastic to aid in the preserving process, also contained the vilified bisphenol A.

Well hold onto your hats. Things just got worse.

This month in the Journal 'Science' a group of researchers from the University of Alberta published a strong warning about leaching chemicals from plastic that they stumbled upon quite by accident.

Specifically, according to a report this morning in Canada's respected national newspaper The Globe and Mail, the medical researchers caution that two chemicals leaking from plastic laboratory equipment were so biologically active that they ruined a drug experiment.

So much for the pronouncements of those who maintain such leaching of chemicals from plastic carries no lasting effect on human health.

What makes the discovery so compelling is the fact that the leaching was happening from one of the most widely used plastics in the world—polypropylene. Yes, you'll find the stuff in lab beakers. But you'll also find it in clothing, in yogurt tubs.

It should be noted that the warning in the current issue of 'Science' was a heads-up to other scientists that they will have to carefully monitor any experiment carried out with polypropylene containers, given the possibility that two chemicals leaching from the plastic could have the same, experiment-ending effects as that found at the University of Alberta. The warning was not meant as a health warning.

And not enough is known about the two chemicals found to be leaching—quaternary ammonium biocides, and oleamide—to conclude, or even suspect concern about health.

"It's very difficult to say whether we should be worried from a health point of view about this," said Andrew Holt, the paper's lead researcher and an assistant professor of pharmacology.

However, health advocates take a different view, expressing the fear that such plastics might be leading to unknown effects by way of human exposure.

"We simply don't want these chemicals getting into our bodies," said Rebecca Sutton, senior scientist with Environmental Working Group, the U.S.-based advocacy organization.

Well, one chemical already is, and quite naturally. But more on that in a moment.

Back in the 1990s, researchers who discovered a similar leak of bisphenol A from plastic lab equipment fostered intensified testing of the chemical that has subsequently led to its ban from certain products.

Oleamide, a compound used to improve the fluidity of molten plastic, occurs naturally in the human body, and is found in the brain and blood.

The question then, is what happens when humans are exposed to more of this chemical than that which is normally found in the body? Thus, it's not the presence of oleamide, but the amount.

Ms. Sutton expressed concern that exposing people to extra oleamide might alter brain function. "If we end up dosing ourselves with higher levels, this could disrupt various processes." Oleamide is added to other types of plastic, such as polyvinyl chloride and low-density polyethylene.

More PRODUCT INJURY News
According to the report in the Globe and Mail, a team lead by Dr. Holt made their discovery in Alberta while conducting experiments on a human enzyme that serves as the target for drugs designed to treat Parkinson's disease.

The researchers were attempting to inhibit the activity of the enzyme with ammonium chloride, and were surprised to find that even with the addition of only one part per million of the ammonium chloride—an amount so minute it was expected to have little effect—some mystery substance continued to block the enzyme function.

Initially suspecting contaminants in chemicals they were using, the research team eventually concluded that biologically active substances were leaking from the plastic tubes they used to transfer liquids in the experiment.

The group wrote to the U.S. Environmental Protection Agency last month, objecting to an effort to loosen exposure standards for quaternary ammonium compounds.

Posted by
Lynda Plumb
on February 22, 2020
I am very concerned about this finding..Polypropylene resin polymer = plastic is in all mesh material....These materials
are used in all hernia repairs ..this mesh has devastating side effects ....so many complications so many are effected
It’s also used in all vaginal problems ‘..so many women have pain complications ..and were the plastic mesh is placed ..it’s start to erode very quickly ..so many women in this country have terrible pain ..were the mesh brakes off going into joining to other pars of the body ...
With hernia mesh that has affected men,and women ..the erosion can come at any time even 20 years later ...once plastic mesh has been implanted ..it is acting as a foreign body reaction hitting on the bodies immune system ...the body aches from head to foot ..low grade fever ..sweating ..it’s harming the body in many ways .’..it was stated many times that plastic implants are not compatible in humans ...’so many sick because the use of PP ...it need to be investigated ..this piece of mesh never tested on humans ..At first it manly come from the US ...health Canada needed to look at this implant before it was allowed to goon the Canadian market .
Regards Lynda ...13 years with hernia mesh ..and a life of hell ...l did not know l had this mesh ..until l got my surgery reports .

Posted by
Emma Kiana
on April 3, 2019
It is interesting to note that polypropylene is really a type of synthetic silicone. Yes, in the medical industry, this product is a great plus, but always look at statistics before using this (or any product uncertain about). It does leach chemicals into the body, such as for inhalation or urination.

Posted by
DD
on August 3, 2017
This is what prolene hernia mesh is made from.
Posted by
Barbara
on December 2, 2016
Are they in sane! If they keep putting toxic polypropylene
In bodys with mesh bladder slings or anything it should be attempted murder septis, auto immune groan nerve pain killing so many! No harm please stop anymore from being done.
Posted by
Debra
on March 4, 2014
How long does it take for these chemicals to leach out? Months, years, number of uses... People are using this stuff for food gardens.