As the temperature drops people are beginning to use their propane heating devices more frequently, increasing the risk of propane explosions and other problems.

Propane is a liquified natural gas and its use exposes consumers to potential dangers. Luckily, there are a number of things that you can do to minimize the risk of a propane explosions or other nasty events. 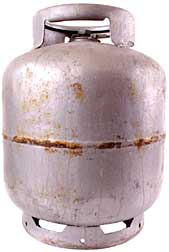 Although propane has a strong odor, like rotten eggs, do not rely on smell alone to detect propane leaks. People with a less sensitive sense of smell due to age, a medical condition, or the effects of medication, alcohol, or drugs may not be able to smell a propane leak. In addition to a lack of the sense of smell, odor fade, an unintended reduction in the concentration of the odor of propane, can occur due to the presence of air, water, or rust in a propane tank. It is always a good idea to have a gas detector in your home.

If you detect propane in your home the first thing to do is shut off the flow of fuel from the tank, if it is safe to do so. This can be done by lifting the lid of the tank and turning off the on-off valve. Leave the area immediately and do not using anything that could cause a spark such as lights, appliances, telephones, or cellphones. Once you are a safe distance from the propane leak, call your propane supplier, who should be listed on a lable on your propane tank, and let them know that propane has been detected in your home.

If you walk into a home and smell propane do not turn on any lights or do anything that could cause a spark. Simply get out of the house immediately.

It is always a good idea to make sure your propane tank is checked at least once a year by a qualified sevice technician. A proper inspection will include a check of all parts of the propane system, including vents. However, even if you have professional inspections, do regular checks on your own for any leaks.

Propane explosions can happen to anyone at any time. The following people's lives were changed by propane explosions:Propane explosions can be devastating. Unfortunately, it only takes a small amount of leaked propane to cause a serious explosion, so it is vital that you do everything possible to prevent a propane leak. Immediately report any defects or malfunctions in your propane system so that you can be as safe as possible.

If you own a propane tank and it has exploded or caused injury, please contact a [Propane Explosions] lawyer who will evaluate your claim at no charge.
Request Legal Help Now

Posted by
Lois blake
on February 25, 2015
I recently had a propane furnace installed by a licensed company. The furnace was installed only 6 inches from an Amish coal furnace that is only 2 years old. I questioned the safety of proximity and I was assured it was safe. I intended to use the coal furnace as back up but I'm afraid to.
Posted by
james elkin
on February 19, 2015
may of 2014 I was renting a man camp unit on property in the bakken oil field. After just one day at the man camp I did laundry (brand new appliances). After putting clothes in drier before bed I woke up for work and first thing I check if clothes were dry. They were still damp. Standing only in my underwear I shut the door and hit start button. I turned around toward the coffee pot and boom! After the ambulance came I asked for something for the pain. They gave me something knocking me out. I awoke 10 days later in regions burn unit in st.paul. I received third degree burns over 70% of my body and am very very lucky to be alive. I still really don't know what happened. I do no I did not smell a thing and think I have a good sense of smell.