More CRIMINAL LAW News
A Kenton county man who claims to have been the victim of police brutality has filed suit against local authorities seeking a reported $15 million in damages. 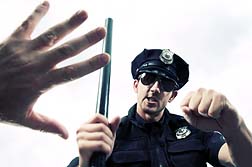 Terry Williams was arrested for indecent exposure and public intoxication in July 2007 when the police found him jogging naked alongside Interstate 75. The arresting officers proceeded to beat the unarmed man with their batons, blind him with pepper spray and shock him with a Taser gun more than 20 times.

The incident was caught on video by a cruise camera.

Photos of Williams taken after the beating reveal several cuts, scrapes and puncture wounds from the barbs fired from the Taser gun.

If you or a loved one have suffered losses in this case, please click the link below and your complaint will be sent to a civil & human rights lawyer who may evaluate your Criminal Law claim at no cost or obligation.
Request Legal Help Now