U of C Study: Botox Spreads into Neighboring Tissue

Research conducted at the University of Calgary in Canada has found that Botox seems to have a mind of its own when injected into the body. This means that it is not as controllable as was previously thought because it spreads into tissues and muscles near the injection site.

These findings come as a result of a study involving 60 animals, mostly rabbits that were injected with Botox and who experienced spread of the toxin to other places within their bodies. But it seems that the affected tissue and muscle was only near the injection site and nowhere beyond those areas. As a result, researchers do admit that more research is needed to confirm or reject these findings. 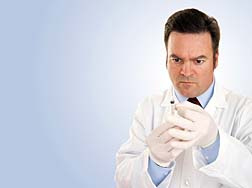 Botulinum type-A toxin, the trade name for Botox, is the leading product used to fight wrinkles, but through time has been used for procedures that are not cosmetic-related. These non-cosmetic uses include helping children with cerebral palsy in relaxing their spastic muscles. However, there have been reports that the toxin moves to other parts of the body and causes paralysis and even death, especially in the children being treated and in some cosmetic-related cases.

The findings by the U of C are coming about right after concerns about Botox have been raised and these findings will be published in the Journal of Biomedics in the near future. Both the U.S. Food and Drug Administration and Health Canada have recently begun reviews on Botox regarding how easily it spreads to other parts of the body.

The spokesman with Health Canada, Paul Dushesne, says the review is ongoing and there is not yet anything new to report. He has said that there is a lack of confirmed cases regarding distant spreading related to Botox. However, he does acknowledge that there is a spread to the tissues and the muscles surrounding the injection site. As for what kind of danger a spread presents, researchers are still up in the air as to what the potential dangers are since they do not have substantial cases to study and research has only showed short distance spreads of the toxin.

As for the effect Botox has in children, it has proven to be very helpful in giving children with cerebral palsy a better quality of life because it allows them to walk and move around for years when they would otherwise not be able to do so.

More News
Professor Herzog, the U of C professor who conducted the research in the summer of 2007, has stated that the dosages are limited in children receiving Botox for cerebral palsy and that the side-effects are rather minor, which leaves little concern that it spreads or "seeps" into neighboring tissue and muscle. However, if Botox is used on an ongoing basis repetitively, then the accumulative effects could be harmful. He does state that his results should not sound any alarms. Rather, they should be used as notice to doctors to be vigilant when administering the toxin by staying with the dosage and targeting the right muscle. Not doing so could have severe consequences and even result in death since many Botox cases have involved dosage mishaps because of the toxicity of the treatment.

However, further research is needed to see how dangerous the spread of Botox just might be. So far, researchers know it does spread, but what isn't known is how far and how fast and what areas of the body may be more susceptible to this spread.

Those are very important questions that have yet to be answered and researchers are hoping to have answers for the public very soon.