When Alyssa S. went in for Botox injections, she had no idea that Botox could have serious side effects. Unfortunately, information is coming out that Botox causes some very troubling adverse reactions—including difficulty breathing and swallowing. Some patients are now investigating a possible lawsuit against the maker of Botox, alleging they were not adequately warned about the life-threatening side effects.

"I had Botox for wrinkles in the forehead and to lift the eyebrows," Alyssa (not her real name) says. "The next day I woke up and my eyebrows were beginning to fall. Three days later they were getting really nasty and within a week they had come down quite a bit, to the point where I couldn't see properly, couldn't read and my eyelids couldn't open properly. 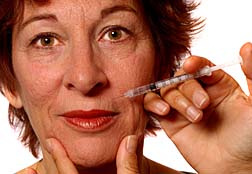 "I went back to the doctor, who covered his shock and dismay by saying he must have put in too much. So, he injected more Botox in another place to raise the eyebrows back up. I went home and later that day I got a severe headache and upper backache that just wouldn't go away. A couple of days later the symptoms progressed to where I had trouble swallowing. That was really scary. I had to sleep sitting up because I was afraid to lie down in case fluids went down the wrong way [into her lungs].

"That was bad enough. Then, I was getting some ringing in my ears, which I still have right now. I have blurry vision and an extremely dry mouth and nose. My nose is not producing mucus anymore, so I have to use saline solution to keep it moist. I am putting eye drops in my eyes 20 times a day because my tear ducts are paralyzed, which is also quite dangerous.

"I have some slight breathing problems. My whole body feels depressed—it feels heavy. I have flu-like symptoms. This has been going on for weeks. I went to a doctor yesterday to get a referral to an ear, nose and throat specialist because this is serious. No one seems to know anything about Botox. The doctor said my symptoms have nothing to do with Botox, but I've done my research. She said that Botox wouldn't migrate but when I asked if she was sure, she said, 'No.' This bothers me: If I hadn't pressed her, I might have thought it was something else.

"I've done research. I know that Botox does, in fact, migrate. It's individual, based on dosage and metabolism and where the injection is given.

"My muscles have also been somewhat spastic—they're not working properly. When I'm speaking right now, it doesn't flow [there is some slight hesitation between her words, almost as though there is a tiny delay in getting each word out]. My symptoms mimic symptoms of botulism poisoning.

"I think the most severe problem was the difficulty swallowing and breathing. The droopy eyelids were bad enough, but the other stuff is really worrying. You feel like you've had a stroke or something. I requested a vision test and now they've told me that my vision is so bad that I cannot drive my car.

"The swallowing has improved and the drooping eyelids have improved, but I'm still not 100 percent. I don't look like me. Apparenty, it will take four to six months for this to wear off. It is better than it was; I'm improved, but not 100 percent by any means. I have virtually all of the bad side effects of Botox, but I was told it was safe and the wonderful effects would last three to six months.

More News
"It becomes scary because the swallowing and breathing issues are major problems. They can be life-threatening. My heart felt like it was palpitating, but I don't know if that was anxiety or from the Botox. On the weekend, I washed the floor and I could hardly lift my head up afterwards because it was too much strain.

"I think that there isn't enough information given. The other problem is that people who get Botox won't necessarily talk about the problems. They don't want other people to know they've had Botox. If you've had a problem with it, you need to report it. Get on it. Don't be embarrassed about it."

Posted by
John Williams
on December 29, 2017
I had Botox treatment for chronic migraines for the first time eight days ago. Injections were to my forehead, temples, back of the head and shoulders. Almost immediately, I felt stroke like symptoms down my left side, affecting left side of face, left side of tongue and left arm and leg.

Also suffered some sever migraines in the first several days.

A few days ago, I noticed that the left side of my forehwad felt numb, and then noticed in the mirror that I was unable to raise the outside half of my left eyebrow. the right side is unaffected. Seems to have got worse as the days have gone by.

Left side of my face and body still feel a little odd, still suffering headaches and some dizziness. Hoping will all settle down. Was told by the practitioner that all adverse side effects will be temporary.

Hope everybody is progressing well.

Posted by
Sheriann Baker
on July 14, 2017
I had botox for my migraines 3 years ago. When it was done they gave me 36 needles and after thd 4th one I heard a pop. The day after was the worst ever. Was in pain for 3 months. Went to the hospital they said I was the 1% who had a bad reaction. Anyway 3 weeks ago I had a grand mal seizure. They think I had a stroke 3 years ago! Botox? I am waiting for an MRI to confirm.
Posted by
Lori
on April 19, 2013
Do not get botox it has been 7 months since I got injected and I am still have issues. My sinuses are constantly in pain my head feels like it is in a vice on and off. And I have burning throughout my whole body. I am always tired and anxiety is awful. I have never been through so much in my whole life. Also today and this is 7 mos out I felt like I couldn't breathe. It is so scarey. I have been to the hospital 3 times. 3 rounds of antibiotics and nothing cures the sinus. This is really a nightmare I was never told of these side effects either. I am afraid I permanently damaged myself.
Posted by
lea martini
on October 19, 2012
I had Botox for my eyes, forehead and throat 3 days ago. the next day I felt very sick, nausea, tired, as if I had a flu. that following
night, at 5 am, I woke up with my heart beating wildly, very high nr. of beats, I was diagnosed atrial arrhythmia, given drugs. I feel better, the arrhythmia seems to have gone, my beats are high, approx. 100 per minute, feel very tired, my blood pressure is high, 150/100. I am sure this is all due to the Botox. I hope to recover to my usual good health and how stupid of me to fall into this situation just for GOOD LOOKS!!!! Never again, I prefer to keep my few wrinkles and stay in good health. However, FDA, Doctors, etc. should warn you about the possible side effects.
Posted by
Caroline
on December 4, 2011
I had a Botox injection for a single line between my eyes. I do think the doctor overdid it - my entire forehead was frozen for four months (at least), but the results looked fine and I initially felt fine. A few days after the injection, I experienced intense abdominally pain in the middle of the night and a feeling of panic as if I were dying. I got out of bed and few minutes later, fainted. I have never lost consciousness before in my life. For the next ten days, I had a flu-like illness and I never fully recovered - for a year now, I have had one illness after another - generally a low grade fever and headache - swollen joints, rashes that come and go. I haven't gotten any answers except that it's possible I've developed an autoimmune condition. I have no genetic markers for this or any family history - I have been healthy and in shape all of my life. For the last year, I have been debilitated more often than not and frightened beyond belief. I can't say with any certainty that the Botox injection was the cause, but the timing corresponds with the onset and there were no other unusual factors in that period. Because I was concerned about injecting a toxin in my body, I met with the doctor ahead of time to discuss risks and she assured me there weren't any - it was completely safe, according to her, and the only potential side effect was the possibility of swelling at the injection site or a mild, temporary headache. I feel there may be unknown or undisclosed side effects and patients are entitled to some warning so they can better assess the risk vs. benefit.