Many are willing to go great lengths to achieve beauty, which even means gambling with their lives. With new evidence that Botox allegedly causes paralysis and even death in some of those who swear by the toxic boost, those who religiously receive the injections are said to be risking their lives to look good.

Such public figures as Kylie Minogue, Elizabeth Hurly, and Madonna are said to be strong followers of the Botox revolution. When looking at them, it is obvious that the Botox injections they receive are doing a good job. They look as if they receive 8 hours of sleep every night and eat all of the right foods, but it is Botox that creates that flawless look. 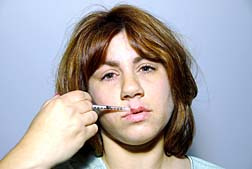 One group is taking a stand because there have been 16 deaths associated with Botox. Ralph Nadar's group, Public Citizen, is putting pressure on the FDA to fit the Botox label with a black box warning.

The reason for this pressure on the FDA is because the neurotoxin Botox is comprised of, botulinim, comes from the same group of poisons that botulism belongs to and botulism frequently causes food poisoning that is fatal. However, Botox is used in the treatment of wrinkles that especially appear in the forehead area. What it does is paralyze the facial muscles and has been boasted bymany as a very effective and safe way to stop visible aging. It has been lauded on many different occasions as being a miracle.

Public Citizen states that data by the FDA proves that there have been 180 cases within the United States that report of people developing these conditions after receiving the injections. Four of the deaths were children. Public Citizen also found in their analysis of data from the FDA that there were 658 cases of severe side effects between November 1997 and December 2006. 180 of the 658 cases involved pneumonia and/or aspiration. 87 of the 180 had to be hospitalized.

However, despite these findings, many are still turning to Botox as a solution because it is cheaper than plastic surgery. In fact, approximately 3.8 million Botox injections were administered in the U.S. in 2005. That means the industry brought in $1.4 billion for that year.

Many critics are amazed at how so many people can willingly have a toxin injected into their faces, especially when many women who have had the injections have reported side effects after having the injection. They have said that the worse side effects come when the area that was injected is massaged because it moves the toxin around the face and has been known to cause the eyelids to droop as well as cause headaches.

More News
Nevertheless, there are some celebrities such as Angelica Huston who no longer receive Botox injections due to freezing of her face. She claims that she had a serious headache for four days after receiving her Botox injection. This was with the injection being administered properly.

However, there are instances in which the drug is not administered properly and patients may receive an overdose. There have been instances in which patients have received overdoses and have had to be placed on respirators while in critical condition. It is instances such as these that result in lawsuits due to death, injury, and emotional distress for the recipients of the treatment.