Botox Migration a Recipe for Disaster

As new research continues to reveal that Botox, and Botox Cosmetic may not necessarily be the risk-free, never-give-it-a-second-thought cosmetic treatment that people eat up like candy, there are those who look beyond the potential dangers and even beyond the need.

Botox has been around far longer than most would suspect, as the use of Botox for cosmetic purposes is a fairly recent indication. Botulinum toxin has been used for years to treat muscle spasms, which prove debilitating for some people and has been, according to some, a godsend for helping to control limb spacticity in patients suffering from cerebral palsy. Most, however, have received Botox injections for eye and neck spasms. 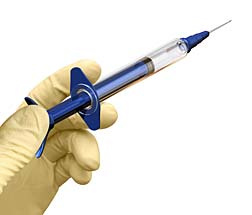 The use of Botox for cosmetic purposes was actually pioneered by an ophthalmologist in Vancouver, B.C. twenty years ago. Dr. Jean Carruthers was using botulinum toxin to treat a client with an eye condition, and noticed the positive effect the Botox had on her patient's skin. "My poison will get rid of your patient's wrinkles," she is said to have told her dermatologist husband in comments appearing in Maclean's magazine.

And Botox Cosmetic was born.

Popularly, we know it simply as Botox, and know it as the stuff that removes wrinkles. Which is true. It's HOW the Botox removes wrinkles that is the stuff of science. Botulinum Toxin Type A is a purified form of the nasty stuff more commonly associated with botulism, the horrible thing we can get from canned food that has gone bad. Botulism can kill. However purified, the toxin has found a legitimate use. It works by interrupting the communication between nerve cells, temporarily paralyzing injected muscles.

Given the fact that wrinkles are caused by the contracting of facial muscles, it has been found that relaxing, or temporarily paralyzing those muscles, gets rid of the wrinkles. It's temporary—about three months or so—but it's just a jab, vs. painful, invasive and expensive surgery.

Little wonder Botox exploded in popularity. Last year Botox represented over a billion dollars in worldwide sales for its manufacturer, Allergen. In a few short years it has grown to become the #1 cosmetic treatment in the world. Last year a drop-in storefront Botox clinic opened on Manhattan's exclusive Upper East Side. Dentists in British Columbia in Canada, and in the United Kingdom have been given the nod to offer Botox injections in their practices. Women find it's handy to hide the Botox injection bills from their husbands, as it is classified as a dental service (albeit elective).

And Botox has been pressed into service for temporary earlobe and neck lifts, for mitigation of underarm sweating, and even the so-called 'Botox boob job,' whereby botulinum toxin is injected into the pectoral muscles, which somehow raises the breasts.

However, it should be noted that the US Food and Drug Administration (FDA) only approved Botox Cosmetic for use in the horizontal lines between the eyebrows. Two months ago, the US drug regulator put Botox under a safety review after dozens of adverse reactions were reported. As well, sixteen deaths have been linked to the use of Botox, according the advocacy group Public Citizen.

Within the same time frame, new and disturbing findings have begun to emerge which cast some doubt as to the ultimate safety of Botox.

The concern, which initially only circulated through medical journals but has since been widely reported in mainstream media, surrounds the potential migration of the neurotoxin from the initial injection site. A study by the Italian National Research Council discovered that Botox injected into the whisker muscles of rats, had migrated in trace amounts to the brain stem in as little as three days.

A Canadian study achieved similar results. Last month the Journal of Biomechanics published the findings of Walter Herzog, a noted kinesiologist from the University of Calgary. While researching osteoarthritis and joint degeneration, he found that botulinum toxin injected into the supporting muscles of cats not only paralyzed the muscles into which the toxin was injected, but had spread into, and weakened all muscles in the area.

More News
Supporters of Botox and botulinum toxin, as does Alleregen, argue that Botox has proven safe and effective. However these latest findings are injecting a newfound caution into the mix. Dr. Peter Misra, from the National Hospital for Neurology and Microsurgery in the UK, writes in the British Medical Journal, "In this atmosphere of 'Botox parties' - where champagne-sipping socialites are injected with botulinum toxin - it is easy to forget that it is a potent neurotoxin and that its very long-term effects are still unknown.

"Robust evidence for the action of botulinum toxin (Botox) on sensory neurons is lacking."

While there has been only one death potentially linked to the cosmetic use of Botox, this newfound concern regarding the ability for the toxin to migrate has some people worried. For example, were Botox injected into the face for cosmetic purposes, or into the eye, or neck muscles for therapeutic purposes, effectively migrate down to the esophagus, there could be dire consequences.

If you have been injured, or negatively impacted from a Botox injection in any way, have a Botox lawyer inject some legal muscle into your case.