A Botox Roundup: Beware of the Lunchbox Face Lift

Beyond the risks associated with the potential for Botox and Myobloc to migrate beyond the muscles for which it was intended, is a growing global concern with regard to just who is doing the procedure, and what they're injecting.

This week the Physicians Coalition for Injectable Safety (PCIS) cautioned consumers against accepting Botox treatments while on vacation, from someone they don't know, and with a product they can't verify as approved. 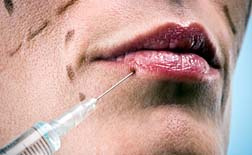 Long before Botox was making headlines over the possibility of the substance migrating away from the initial injection site and posing sometimes dire health consequences for the patient, concern was growing over the proliferation of Botox spas and Botox parties, where Botox Cosmetic (botulinum toxin) was administered to erase lines and smooth wrinkles, providing for the client a more youthful look. Driven on by the reports of celebrity use, including actor Elizabeth Hurley and singer Kylie Minogue, consumers are continuing to line up for a process that until recently was reserved for the rich and famous.

No more. It seems you can get a Botox injection from almost anyone, anywhere. In some jurisdictions, dentists are now allowed to administer Botox Cosmetic, a boon for patients who want to hide the treatments from their spouse. Botox treatments are being offered to tourists and vacationers in foreign countries—in resorts and on cruise ships.

However, Botox is strictly regulated, at least in this country. When the US Food and Drug Administration (FDA) first approved Botox injections for cosmetic purposes, the only approved use was for the horizontal lines between the eyebrows. That's it. But as the use of Botox Cosmetic has exploded, so too has the locations in the face where Botox is now, routinely injected in an effort to diminish laugh lines around the mouth, and crows' feet around the eyes.

As for the quality of the Botox available at the resort you are visiting in some far-flung distant land, the jury is still out. The FDA only has jurisdiction in the United States.

"You must know your doctor," says Dr. Joao Carlos Sampaio Goes, the PCIS Coalition leader who practices in Sao Paolo, Brazil. "Board-certification, licensing and standards for safety in medical offices and reporting adverse events are unique to every destination. It is vital to know the country whose jurisdiction the procedure is performed under, and what standards are required and are practiced."

That statement is backed up by Dr. Ira D. Papel, of Baltimore. "Each country has its own regulatory agency that approves pharmacological agents and devices. Ask specifically the approval status in the governing jurisdiction and in your own home country, and accept only genuine, branded and approved injectables." Keep in mind the caveat that in international waters there may be no governing regulation, and therefore no agency where adverse, potentially permanent events are to be reported.

Botox Cosmetic is derived from the bacteria Clostridium botulinum, the very same bacteria that lay at the root of botulism poisoning. Botulinum Toxin Type A, a purified form of the bacteria, works by temporarily paralyzing the muscles believed to be responsible for the various age wrinkles most Botox clients find unsightly, as they pursue the elusive fountain of youth. The effect lasts about four months, after which the affected muscles return to their normal state. Thus, the Botox injections would have to be repeated every four months or so.

Various adverse incident reports have been filed, among them droopy eyelid syndrome. A common side effect that is thought to last for only a few days, some patients have experienced a far longer cycle. One patient could not properly open her eye for several weeks.

More BOTOX News
More recently, concern has been expressed with regard to the allegation that Botox can migrate away from the initial injection site, and impact other muscles. Such migration has been tested and proven with animals in a laboratory setting. However, individuals have been hospitalized with various adverse responses to the therapeutic use of Botox, used in many patients for muscle spasms, including the muscles of the neck. Some patients have been hospitalized after experiencing difficulty swallowing, a sign that the Botox has migrated towards the esophagus.

Meanwhile, in England—where Botox is quite popular—cosmetics are not classified as medicinal products or medical devices, and many treatments are being performed by under-qualified practitioners, it has been reported.

What's more, some treatments are entering the market without proper testing.

Little wonder more people are showing up in court following either a therapeutic, or cosmetic Botox procedure that has gone wrong.

If they show up in court with a bag over their head, you know why they're there…