When people think of Botox they tend to think of the drug's cosmetic uses. In fact, most people automatically assume that someone having a Botox injection has done so as a way of improving physical appearance. However, that is not the only thing Botox is used for. Botox is frequently used to help people with a number of medical problems, including migraines and cervical dystonia. It is also sometimes used to treat cerebral palsy-associated limb spasticity in children. 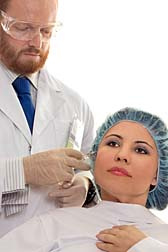 Unfortunately, using Botox for medical purposes does not exempt a person from having severe adverse reactions to the drug. Many of the people who write to LawyersandSettlements.com say they or a loved one were given Botox for medical reasons but have developed even more severe problems as a result.

One such person, Sandra (not her real name), writes, "I have been diagnosed with severe migraines and my neurologist was using Botox for treatment. I had numerous injections in my head, neck and scalp. It did help a little with the frequency of headaches but now I am beginning to suffer terrible side effects. I have severe pain running down the back left side of my neck and I can't turn my head without wrenching pain." Sandra concludes by saying that she will not ever have another Botox injection. "The migraines were bad but the Botox used to treat them is crippling."

Other patients report serious problems such as an inability to speak and an inability to swallow following Botox injections. Some wonder if the Botox has moved into other areas of their body. One mother, whose son was given Botox, writes, "He [her son] can no longer eat and has a g-tube….The Botox has probably migrated to his brain."

The FDA has confirmed that in some cases, the botulinum toxin used in Botox and Myobloc spreads in the body beyond the injection site. The organization reports that serious occurrences of Botox migration resulted in hospitalization and death. Sadly, these occurrences were reported most frequently in children who received Botox for limb spasticity. The FDA has not approved Botox for such uses because proper safety trials have not yet been carried out so it is not known what dose of Botox is appropriate for children to receive.

According to the FDA, adverse reactions to Botox and Myobloc include death, respiratory failure, difficulty swallowing, difficulty breathing and weakness. Patients have further reported vision problems, damage to their eyes, weakness in their neck, difficulty sleeping, slurred speech and overall problems with coordination.

The FDA is currently conducting a safety data review and a review of post-marketing adverse event reports. So far, no additional warnings have been added to Botox and Myobloc's labeling, however that could change as new information is received on the drugs.

If you or someone you love has been harmed by the use of Botox or Myobloc, you may be eligible to join a class action lawsuit. Contact a lawyer to discuss your legal options.