Botox Proving to be a Headache for Some

As critics of Botox continue to lobby for black box warnings regarding the potential for the toxin to migrate away from injection sites to affect muscular function that could allegedly prove injurious or even fatal to a patient, the drug best known for its cosmetic indication is currently being studied for the potential treatment of headache.

Allergan Inc., the maker of Botox, is currently in the midst of Phase III clinical studies testing the potential use of Botox for headaches. While it has not been determined just how the Botox would be administered for this indication if approved, it's ironic that a recent study coming out of Italy found that Botox injected into the whisker muscles of lab rats migrated into the brain. 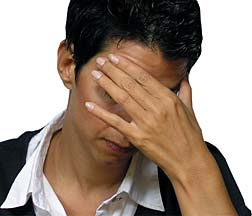 "Currently, Botox only carries approval from the US Food and Drug Administration (FDA) for cosmetic injections between the eyebrows, as well as for certain other therapeutic uses dating back to 1989. In reality, however, Botox has been used at the discretion of physicians for other, non-approved indications, including cosmetic injections involving other parts of the face not approved by the FDA.

It will be interesting to see the outcome of the clinical studies on Botox for headache, if a Florida woman's experience with taking Botox for her migraines, is any indication. As reported by CBS in 2003, Karen Hicks was someone who was quite conversant with migraine headaches, which the St. Petersburg, Fla. grandmother had long battled, headaches that proved absolutely incapacitating when she was younger.

It was then, in 2003, that a local plastic surgeon suggested Botox as an experimental treatment for the relief of her migraines, and Hicks thought she had nothing to lose but the pain. A few days later, she told a CBS Television reporter, she could barely get out of bed. Turns out she was bedridden for six weeks, and was forced to call upon her ex-husband for support while she was ill, riddled with fatigue and pain.

According to the account, a query to Allergan regarding her symptoms delivered little satisfaction, as a company spokesperson claimed that her problems could not have been caused by the Botox.

The drug was being studied for potential treatment of migraines at the time, and it was reported that results looked promising. However, it was also reported at about the same time, five years ago in 2003, that a study by the American Academy of Dermatology revealed instances where patients who had received injections of Botox for wrinkles suffered severe, debilitating headaches as the result of receiving Botox.

"I literally sat down and wrote my will. I moved from bed to couch where I could watch my daughter," Hicks was quoted as saying in the CBS News report.

On April 2nd of this year it was revealed in the Journal of Neuroscience (JN) that an Italian study conducted by the National Research Council's Institute of Neuroscience of Pisa, Italy found that protein associated with botulinum toxin injected into the whisker muscles of rats had migrated to the area of the brain stem within three days of injection. Researchers also discovered that the toxin migrated to various other parts of the brain that controls long-term memory and spatial navigation, and from the superior colliculus—which is associated with eye-head coordination—back to the eye.

The study determined that brain cell activity was disrupted at the injection site, as well as distant-but-connected sites.

While Botox is not yet approved for migraine, and is still undergoing testing, Allergan confirmed in March that it had received a subpoena from the US Department of Justice, United States Attorney's Office for the Northern District of Georgia requesting documents regarding promotional practices involving Botox.

Allergan stated in a release in March that it was their understanding that the inquiry involved questions surrounding alleged, off-label promotion related to the use of botulinum toxin type A for the treatment of headache. In the release, dated March 3rd 2008, the manufacturer states that it is Allergan policy to promote and market products only within the accepted boundaries, and in a manner consistent with FDA-approved product labeling.

It says it is co-operating completely with the US Department of Justice.

More News
In 2001 it was reported that the FDA sent a communiqué to Allergan, citing the manufacturer for minimizing side effects for Botox in its promotional material.

At the time when Karen Hicks, of Florida, was battling the effects of both her migraine, and her Botox injection, an attorney for Allergan was quoted in a CBS news report as saying, "(Botox) has this wonderful, outstanding safety profile. And if there are side effects associated with it, they tend to be mild, tend to be temporary and tend to be local."

Those now lobbying for a black box warning for Botox will suggest that five years hence, that statement rings hollow. Botox has been implicated in hundreds of adverse reaction reports, and several deaths, resulting in some Botox parties being moved from the living room, to the courtroom.