Botox and Myobloc Linked to Hospitalizations and Death 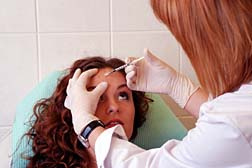 Botox, distributed by Allergan, was first approved in December 1989 to treat blepharospasm (spasm of the eyelids) and strabismus (misaligned eyes or "cross-eyed"). In 2000, Botox was approved to treat cervical dystonia (severe neck muscle spasms). In April 2002, it was approved as Botox Cosmetic to temporarily (up to 120 days) improve the appearance of moderate to severe frown lines between the eyebrows. In July 20, 2004 it was approved to treat severe primary axillary hyperhydrosis (excess sweating).

Myobloc (Elan Pharmaceuticals) was approved in December 2000 for the treatment of adults with cervical dystonia. Dystonia is a movement disorder that causes the muscles to contract and spasm involuntarily. Cervical dystonia, is the most common form of focal dystonia, and is characterized by abnormal squeezing and twisting muscle contractions in the head and neck area.

The FDA is not advising health care professionals to discontinue prescribing these products. The FDA is currently reviewing safety data from clinical studies submitted by the manufacturers of Botox, Botox Cosmetic and Myobloc, as well as post-marketing adverse event reports and the medical literature.

The FDA releases "early communications" to inform the public on the status of its ongoing drug safety reviews. The information only reflects the FDA's current analysis of available data, and does not mean a conclusion has been reached. After the review of the data is completed, the FDA communicates its conclusions, resulting recommendations, and if it taking any regulatory actions.

The product label of these botulinum toxin products already warn that systemic adverse effects, including severe difficulty swallowing and difficulty breathing, have occurred in patients with neuromuscular disorders. In today's update, the FDA is warning the public that it now has evidence that similar, potentially life-threatening systemic toxicity also result after local injection in patients with other underlying conditions such as those with cerebral palsy associated limb spasticity.

The pediatric botulism cases occurred in patients less than 16 years old, with reported symptoms ranging from dysphagia to respiratory insufficiency requiring gastric feeding tubes and/or ventilatory (breathing) support. Serious outcomes included hospitalization and death. The most commonly reported use of botulinum toxin among these cases was treatment of limb muscle spasticity associated with cerebral palsy. For Botox, doses ranged from 6.25 to 32 Units/kilogram (U/kg) in these cases. For Myobloc, reported doses were from 388 to 625 U/kg.

More News
The reports of adult botulism cases described symptoms including patients experiencing difficulty holding up their heads, dysphagia and ptosis (not able to lift one or both upper eyelids to uncover the eye). Some reports described systemic effects that occurred distant from the site of injection and included weakness and numbness of the lower extremities. Among the adult cases that were serious, including hospitalization, no deaths were reported and none required intubation (insertion of a tube through the mouth down into the trachea) or ventilatory support. The doses for Botox ranged from 100 to 700 Units and for Myobloc from 10,000 to 20,000 U.

Until the FDA has completed its review, healthcare professionals should be alert to the potential for systemic effects such as dysphagia (difficulty swallowing), dysphonia (hoarseness), weakness, dyspnea (sudden, severe shortness of breath), and respiratory distress. Since systemic effects have been reported as early as one day and as late as several weeks after treatment, patients should be told to seek immediate medical attention if they experience any of these events. Lastly, healthcare professionals were reminded that clinical doses expressed in "units" ("U") are not comparable from one botulinum product to the next.

The FDA said it would update the public when additional information or analyses become available.