It put a new spin on the phrase, 'looks that kill.' When it was first revealed that botox injections had the potential to migrate away from the injection site and cause potentially life-threatening difficulties, it left users taking a long look in the mirror and asking, "Is it all worth it?"

It should be noted that swallowing and breathing difficulties have mostly been reported in children with cerebral palsy treated with botulinium toxin for muscle spasticity—an indication not approved by the US Food and Drug Administration (FDA). 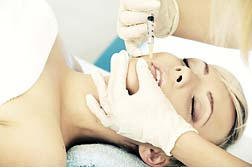 In an effort to better inform the consumer as to the risks of using botulinium toxin, the FDA yesterday announced that four popular botulinium toxin products now carry boxed warnings, together with the development of thorough Medication Guides for patients.

The updates grew out of the FDA's previous alerts with regard to botulinium toxin products used primarily for cosmetic enhancement, and a previous mandate issued by the FDA to foster the changes appearing yesterday.

In addition to the boxed warnings, the FDA reveals that three of the four products now have new established drug names, or 'generic' names, in an effort to highlight the fact that botulinium toxin products are not interchangeable due to the diverging units applied for measurement.

While the generic names have changed, the original formulations of the drugs have not.

Botulinium toxin works cosmetically by temporarily disabling facial muscles that are thought to produce frown lines. However with the potential for the product to migrate away from the original injection site, the affect on muscles integral for survival—such as swallowing and breathing—could prove devastating.