Doctors helping women give birth make many urgent decisions in the course of their work, but sometimes those decisions can lead to devastating birth injuries. Families who have children born with a birth injury can face massive medical bills and may have to provide professional around-the-clock care for their child, increasing the costs associated with the birth injury. Although many doctors try to make the best decisions for their patients, sometimes those decisions can result in devastating consequences for the children and families involved. 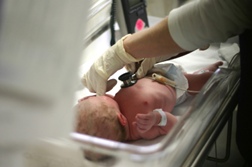 One lawsuit, filed against a doctor in Ohio, alleges the defendant made decisions during the birth of Haley Cobb that resulted in Haley being born with cerebral palsy. According to the plaintiff, Dr. Tara Shipman ignored information from a fetal heart monitor that should have convinced the doctor that Haley's mother, Debra, required a cesarean section.

The Cobb family alleged that the failure to perform a cesarean section resulted in the fetus not receiving enough oxygen at birth and, ultimately, caused her cerebral palsy. According to the lawsuit, Debra was a candidate for cesarean section because Haley was her first birth and was overdue and Debra was over the age of 35.

A lawyer for the plaintiff argued that Haley, now 10 years old, could live into her eighties and requires constant care, costing millions of dollars in expenses. Furthermore, he argued that the parents should receive $2.3 million for pain and suffering. Haley's family said she is unable to eat or drink without help and cannot sit up on her own. The Cobb family argued that a cesarean section would have prevented the cerebral palsy.

According to the Trib Today (10/20/2010), a lawyer for Dr. Shipman said information on the fetal heart monitor did not indicate a brain injury and in fact showed normal fluctuations, leading the doctor to believe Haley was fine. The lawyer further argued that the injury to Haley's brain could not have been caused by a lack of oxygen but was instead caused by an injury that would have taken place prior to Haley's birth.

A jury unanimously found that Dr. Shipman's negligence was the cause of Haley's cerebral palsy and awarded $13.9 million to the Cobb family—the largest settlement in a malpractice case in Trumbull County.

If you have suffered losses in this case, please send your complaint to a lawyer who will review your possible [Birth Injury Lawsuit] at no cost or obligation.
Request Legal Help Now