Defective Tires: We must send a message to China

As the parade of tainted products continues to roll past the eyes of angry customers and wary politicians, one thing is becoming increasingly clear: consumers no longer trust any product that comes out of China, including defective tires.

With tainted toothpaste and lead paint-covered toys once again in the news, word about the latest tire recall and the suspicion that China has been dumping millions of potentially unsafe tires into the U.S. market serves to further worry Americans concerned over the crashworthiness of their vehicles. 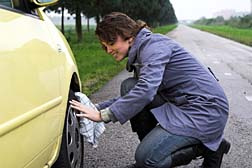 "To borrow a line from Ralph Nader's groundbreaking 1965 book, it doesn't matter how safe your vehicle is, or the number of protective features it has...if you're riding on unsafe tires, your car is unsafe at any speed.

The nation's frustration is now reflected on the TV screens and within the news pages of America's media - including CNN stalwart Lou Dobbs, who just a few nights ago on his highly rated show on CNN asked aloud what Congress was doing about the problem.

It's a question that lawyer Jeffrey Killino, of Woloshin Killino P.C in Philadelphia, has been asking for almost a year.

Last August, two Pennsylvania residents were killed and a third severely injured after the treads on the imported tires fitted to their vehicle separated from the tire and wrapped around the vehicle's axle, causing a violent accident. Killino, who is representing the victims and their family in litigation surrounding the accident, has been sounding the clarion call over bad tires ever since. He was recruited to comment on the Dobbs show August 9th.

It is alleged that the Pennsylvania accident, which occurred in the summer of 2006, was caused by conscious decision on the part of a manufacturer based in China not to install a gum strip in the tire - considered a vital safety feature in the manufacturing of tires.

Killino makes the point that the Chinese tires may have retailed a bit below market price, but not sufficiently so that it might lead people to believe there was something deficient about them, as the costs were so much lower.

While it's obvious that China has a huge problem with the quality and safety of its exports, Killino feels that an equal responsibility must be borne by the U.S. regulatory system, in order to ensure that citizens buying these products are not put at undue risk.

With a consumable like toothpaste, or tires that you and your loved ones ride on, Killino says, "you've got to have certain minimum safety parameters."

Killino points out that NHTSA doesn't do recalls - rather, it functions more like a watchdog. "The distributor (of the defective tires) had to do the recall voluntarily. Our system doesn't have enough regulation and involvement. There's a real regulation gap that we need to look at."

While vehicle manufacturers market their products, and consumers buy those products according to the safety ratings, there is often little attention paid to the tires on those cars, beyond the gleaming wheels that serve as a focal point for the consumer.

We tend to assume that tires - especially when they're new - are safe, and reliable. We never give them a second thought - but we should.

"You got bad tires, and it's all downhill from there," says Killino. "It's just so important to have good, safe tires on your car.

"As far as auto safety is concerned, we know that there is a tremendous number of rollovers and crashes that all result from tires."

More Automotive News
In June, Foreign Tire Sales (FTS) of New Jersey sought support from the NHTSA in recalling 450,000 tires bearing the Telluride, Compass, YKS and Westlake label and manufactured by Hangzhou Zhongce Rubber in China. The importer first smelled a rat in late 2005 after experiencing a jump in warranty claims, but the company assured FTS that the tires were fine. FTS suspicions were confirmed in 2006 when an accident caused by a blown tire revealed that the gum strip normally used to tie the belts together and prevent them from separating was completely missing. The company has since stopped buying tires from Hangzhou Zhongce.

With China figuring so prominently in the import tire industry, there is growing concern, together with an increasing focus on the part of Congress, to address the issue once and for all. U.S. Senator Charles E. Schumer (D-NY) is calling for a full investigation into the importation of defective, and unsafe tires.

It shouldn't take a death to prompt action, but in this case, it has.

"It was that lawsuit (in Pennsylvania) that prompted the recall," says Killino.

"We want to send a message to China and throughout the world that you can't dump unsafe tires on American consumers."