If there were ever such a thing as an asbestosis ''headquarters,'' that would have been the town of Libby, Montana. And two years after W.R. Grace managed to escape prosecution from criminal charges relating to asbestos contamination of the town, the Environmental Protection Agency (EPA) has deemed that the air above Libby is now safe. 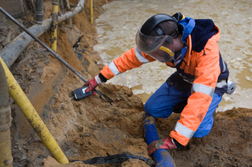 But Libby isn't out of the woods yet, according to an entry in the Lewiston Morning Tribune May 8—the second anniversary of the W.R. Grace acquittal.

The defunct company, which entered into bankruptcy protection several years ago in tandem with the closure of the infamous asbestos mines in Libby, has paid asbestos compensation to about 900 Libby residents who have suffered medical issues—including asbestosis pleural plaques—related to the contamination in the small Montana town.

To that end, many an asbestos lawyer has been dispatched over the years to pursue compensation via thousands of lawsuits due to asbestos exposure.

So far the bill for cleaning up the town has hit $370 million. And while the EPA has signed off on the air quality, a draft toxicity study released 10 years after cleanup operations were launched has determined there are still dangers lurking in Libby.

Most homes in the town and the air have been cleaned up. However, EPA officials concede that some homes may have to be re-visited due to the potential for homeowners tracking asbestos fibers in from areas in Libby not actively targeted by the contamination sweepers.

It doesn't take much asbestos to begat asbestosis contamination, as any asbestosis attorney will tell you.

More ASBESTOSIS News
At the heart of the current contamination issue for Libby is the fact vermiculite, a residential insulation once sold under the brand name Zonolite and used in millions of homes around the nation, was often used as backfill in the town. Thus, while houses in the town where as many as 3,000 townsfolk once lived and the air above have been cleaned—there remains a host of asbestos fibers in the ground, just below the surface.

In residential yards, for example. Gardeners could be affected, given that vermiculite was widely used in gardens. Commercial landscapers and others who perform extensive yard work are also at risk for contamination that could lead to asbestos disease—not to mention tracking fibers and contaminated soil back to areas that were once treated.

The cleanup in Libby has been going on since 2009, when the town was given a public health emergency designation under the federal Superfund law. Many an asbestos claim has been filed, and Libby residents continue to be treated at a local clinic for exposure to asbestos that can lead to asbestosis lung disease.