It is not uncommon in an asbestosis lawsuit to see plaintiffs suffering from asbestosis disease and fighting for compensation 30 years or longer following initial exposure to asbestos. That’s due to the long incubation period inherent with asbestos, where ingested fibers can lay in wait within the body for decades before suddenly manifesting into asbestosis, or mesothelioma. 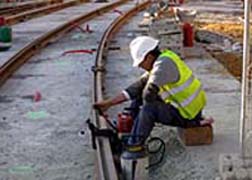 That’s what happened to plaintiff Jim Smith, who filed an asbestos claim following alleged exposure to asbestos while working for the former GM&O Railroad.

With help from his asbestosis attorney, Smith was awarded $1.3 million in asbestosis compensation from defendant Illinois Central Railroad Company.

Smith’s case is an example of the time lag between exposure and the onset of asbestos disease: in Smith’s case, more than 50 years. According to The Pantagraph (1/29/14), Smith worked for three years at GM&O, from 1955 to 1958. Smith alleged his exposure to asbestos stemmed from his brief time there.

And that’s not the only asbestosis lawsuit featuring an extended lag between asbestos exposure and the sudden emergence of disease. In a separate asbestosis claim that was combined with the Smith case for a single, three-week trial, the estate of John Nafziger was awarded $384,000 in compensation.

Nafziger, according to the report, was employed at the former GM&O spanning 1949-1950, and again from 1969 to 1972. More than 30 years later Nafziger received a diagnosis of asbestosis and lung cancer, succumbing in 2007.

Asbestos was an oft-used material popular for its insulating properties. While there is evidence dating as far back as the early 1900’s tagging asbestos as a suspected carcinogen, the insurrection against asbestos for most applications didn’t get rolling until the 1970s, when many industries switched to less-toxic materials, and the use of asbestos was substantially reduced. Asbestos is still produced and widely used in various parts of the world, and domestically remains an integral component for brake linings.

More ASBESTOSIS News
However, most industries in the modern era recognize the perils associated with asbestos and take precautions. This includes Hazmat workers in the renovation industry involved with the demolition or rehabilitation of old buildings.

The McLean County lawsuit was brought under the auspices of the Federal Employers Liability Act, a statute that covers injuries suffered by rail workers while on the job. Even considering the fact that in both cases exposure to asbestos is alleged to have begun in the 1950s, the jury nonetheless found that the former GM&O Railroad knew about the hazards of asbestos, but failed to warn the two men to take precautions to protect their health and minimize risk for asbestosis pleural plaques.

The jury made its finding in late January. Combined, the award for the two asbestosis lung disease cases totaled $1.7 million. Asbestosis, or mesothelioma, is considered a death sentence. There is no known cure.

Posted by
DOLETHA FARROW
on January 8, 2015
My sister and I lost our father from asbestosis September 2001