A massive explosion in San Bruno, California has resulted in at least four deaths and more than 50 injuries. The San Bruno gas explosion occurred on Thursday, September 9 and is believed to have been caused by a ruptured fuel line. Thirty-eight homes were destroyed in the San Bruno fire and 120 were damaged across 15 acres. Residents of the area were ordered to evacuate due to the San Bruno gas fire.

Send your San Bruno Fire claim to a lawyer who will review your claim at NO COST or obligation.
GET LEGAL HELP NOW 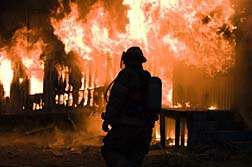 According to The New York Times (10/09/10), four people died in the San Bruno explosion with another 52 injured and three suffering third degree burns. A local state of emergency was declared. Additionally, four firefighters have been treated for smoke inhalation.

An official said that a natural gas line ruptured at around 6:24 pm, but it is not yet known what caused the fuel line to rupture and explode. Ground zero for the gas explosion is located in the area of Glenview Dr. and Earl Ave. in San Bruno.

A team from the National Transportation Safety Board (NTSB) is investigating the incident, which was so loud that some people initially believed a plane had crashed into the area. 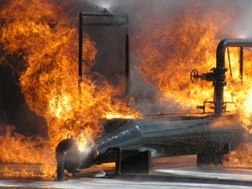 The New York Times reports that Pacific Gas and Electric had done work in the area earlier in the week and residents had complained about smelling gas. The residents were reportedly told to close their garage doors to avoid the odor but the problem was not fixed. PG&E has said it so far has no evidence of complaints being made to the company about a gas odor in the area and the NTSB says officials have so far uncovered no evidence that calls were made to the company. The NTSB is asking residents who called PG&E with complaints to let officials know about those calls.

According to CNN (10/09/10) fireballs leapt as much as 80 feet high after the explosion, which now has some people questioning the safety of gas pipelines. According to the US Department of Transportation Pipeline and Hazardous Materials Safety Administration Pipeline Safety Program, in 2009 there were 158 reported pipeline incidents resulting in 10 deaths and 50 injuries.

The California Public Utilities Commission is launching a formal investigation into the pipeline explosion.

Possible Cause of San Bruno Explosion 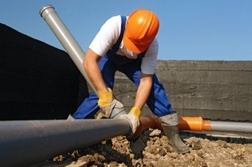 Investigators reportedly uncovered evidence that underground sewer lines were replaced in the same area as the pipeline explosion, including an intersection of the sewer pipes and the gas pipe at the location of the explosion. When asked about the possibility that the sewer work was linked to the explosion, a PG&E spokesperson said the company inspected the gas line before and after work and found no evidence of problems.

According to the Mercury News (09/12/10), construction company D'Arcy and Harty Construction was hired to replace the underground sewer lines. They reportedly did so using a technique that can cause ground shaking and soil disruption. The NTSB is now investigating whether this could have caused enough damage to the pipelines to result in the explosion.

If you or a loved one has suffered damages in this case, please click the link below and your complaint will be sent to a lawyer who may evaluate your claim at no cost or obligation.
Please click here for a free evaluation of your San Bruno Fire claim
Last updated on Oct-10-10

As residents awaited word that they could return to their homes following the San Bruno explosion, officials announced that skeletal remains had been found in the area of the San Bruno fire. Although the official death toll in the California fire remains at four, the skeletal remains could push that number higher. There are still people believed to be missing in the fire.READ MORE
Four Dead, 38 Homes Destroyed in San Bruno Gas Explosion