Were you looking for Medtronic lawsuits?

Medtronic has so far faced at least two lawsuits alleging the Medtronic MiniMed Paradigm insulin pumps are defective and have caused the death of patients relying on the pumps to monitor blood glucose levels. There have been at least two Medtronic recalls of the devices, linked to problems with the pumps providing too much or too little insulin. Attorneys are now investigating whether more patients were harmed by Medtronic MiniMed Paradigm insulin pumps that allegedly failed to work as promised.

Send your Medtronic Insulin Pump claim to a lawyer who will review your claim at NO COST or obligation.
GET LEGAL HELP NOW

Medtronic MiniMed Paradigm insulin pumps are used by patients who have diabetes mellitus and need insulin administered to keep their blood glucose at appropriate levels. The pumps offer continuous glucose monitoring and notification if blood sugar levels are about to drop too high or too low. Concerns have been raised, however, that some pumps have failed to supply proper insulin doses, and further failed to warn the patient that there was a failure.

In September 2013, the US Food and Drug Administration (FDA) issued a warning letter to Medtronic, stating that the company had violated quality control regulations at the plant where the Medtronic Paradigm pumps are manufactured. Among issues outlined in the letter were concerns that the devices were adulterated, and that some of the plant' methods or facilities "are not in conformity with the current good manufacturing practice requirements" 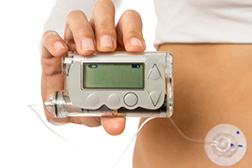 In June 2013, the Medtronic and FDA announced a Class 1 Recall of Medtronic MiniMed Paradigm Insulin Infusion Sets. That recall was announced after concerns were raised that the pumps had the "potential for over or under delivery of insulin if insulin or other fluids contact the inside of Medtronic Paradigm Tubing Connectors."According to the recall notice, fluids that contact the inside of the tubing connector could block vents that allow the pump to prime properly, which can cause too much or too little insulin to be delivered. Too much or too little insulin can cause hypoglycemia or hyperglycemia, which can be fatal.

A similar recall was also announced in July 2009, when Medtronic initiated a recall of certain lots of the MiniMed Paradigm insulin pumps. That recall involved Paradigm Quick-Set infusion sets that may not have allowed the insulin pump to vent air pressure properly, potentially causing the device to deliver too much or too little insulin.

Lawsuits have been filed against Medtronic, alleging the company's MiniMed insulin pump failed to work properly, resulting in death. One such lawsuit was filed by the estate of Charles Slack Jr. According to reports, the pump failed to supply a proper dose of insulin while Slack was asleep and failed to alert Slack that there was a failure. He was reportedly found unconscious and stayed in a coma for several weeks before he died. The plaintiff, an executrix of Slack's estate, alleges Medtronic relied on individuals who did not follow strict testing procedures when determining whether or not the insulin pump was safe or reliable.

In 2012 a similar lawsuit was filed by Alice Pierce against Medtronic, alleging her daughter, Carol Givens, died as the result of a faulty MiniMed device. According to court documents, Carol was hospitalized repeatedly after using the MiniMed insulin pump due to problems with her blood sugar levels, but did not link the issue to a problem with the device. She died on July 9, 2009, of cerebral anoxia with diabetic hypoglycemic coma.

If you or a loved one has suffered similar damages or injuries, please click the link below and your complaint will be sent to a Medical Device lawyer who may evaluate your claim at no cost or obligation.
Please click here for a free evaluation of your Medtronic Insulin Pump claim
Last updated on Sep-3-20

Tucson, AZ: Medtronic devices which have been around since 1988 and 1999 respectively have been the focus of much scrutiny in recent years, with the most recent concern landing earlier this year with a Class 1 recall related to software associated with the SynchroMed Implantable Infusion Pump. A Class 1 recall, about which anyone considering a Medtronic SynchroMed recall lawsuit would appreciate knowing, is the most serious of the three recall classifications maintained by the US Food and Drug Administration (FDA).READ MORE
Medtronic MiniMed Insulin Pump: “MaxiRisk”

Washington, DC: While most Americans with type 1 or type 2 diabetes can control their condition with medication, those with more serious and debilitating forms of diabetes require constant monitoring, together with regular infusions of insulin to not only keep their blood glucose at appropriate levels, but to also keep them alive. Such functions, in recent years, have increasingly fallen within the purview of medical devices designed to monitor and infuse as needed, silently and automatically. However, the presence of a Medtronic lawsuit - two, in fact - suggests underlying problems that allegedly are costing people their lives.READ MORE
READ MORE Drugs/Medical Settlements and Legal News
READ MORE Personal Injury Settlements and Legal News

Posted by
Karen Fisher
on October 1, 2018
My sister was a type 1 diabetic from an early age. She went on the insulin pump and it helped her until sometime in 2011, 2013 she was having issues, that the pump was not injection her insulin into her body. She had to repeatedly replace the tubing, and I have some of her medical records, where the Doctors are criticizing her, for not attaching her pump to the right / or different areas of her abdomen, and that she was the cause of the problem. I have some records and assume the rest can be gotten from her various medical MD. I found her dead, unexpectedly at home at the age of 59, lying on the floor next to her bed. She had been in fine spirits 2 days prior...We tried to keep the pump but the funeral home said by Ohio Law, they had to take it. This was at the end of May 2017. We did not have an autopsy done, but I still have all her glucose testing monitors. We did not know of the recall, until sometime in October of 2017. Her place had been sold, and the new owners, passed along the letter, to one of Judy's former neighbors, sometime in late September, and that neighbor forwarded the letter to her family in mid October. There has been so much to handle, and I wanted to check and see, if there is still any recourse, esp since medical records show problems w/ the pump and I believe exchanging the pump and conversations about it.I don't have a lot, but what I have, I think shows further inquiry... Thank you for your input. I am her sister, Karen Fisher, and Judy Fisher, was her name. If you can provide me an email address or a fax number, I would be happy to forward some of the information that I have scanned into my computer. This occurred in Worthington, Ohio, and assume laws vary from state to state. Thank you for you consideration.