Send your Florida Medical Malpractice claim to a lawyer who will review your claim at NO COST or obligation.
GET LEGAL HELP NOW 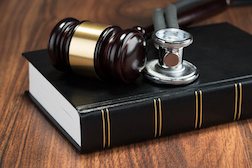 To make a claim of medical malpractice (or medical negligence), patients must show that they had an existing patient/provider relationship with the person responsible for the injury; that the healthcare provider was negligent in their duties; that the negligence caused injury to the patient; and that the injury resulted in damages to the patient.

Patients who file a Florida medical malpractice claim will likely have to support their claim with evidence including medical reports and diagnoses, medical files and related documents, and physical evidence.

Exceptions to the statute of repose include situations in which the medical provider committed fraud or misrepresentation.

Florida has strict requirements before a medical malpractice lawsuit can be brought. These include having an attorney conduct an investigation into the claims, having a "similar health care provider" (similar to the person who committed the alleged medical malpractice in training and expertise) who is a medical expert review the patient's records, having the expert verify there are reasonable grounds for a malpractice lawsuit, and filing documents involving a notice of intent to initiate litigation.

In 2016, a Florida family filed a lawsuit against Wolfson Children's Hospital in Jacksonville, and a doctor at the hospital, alleging a 19-month-old suffered severe health problems as a result of negligence. The baby Ava-Kate Parsons, swallowed a lithium batter in March 2016. The mother, who witnessed the event, called 911 and had Ava-Kate taken to hospital where she demanded the batter be removed immediately.

According to the lawsuit, the doctor told Ava-Kate's parents that the situation was the same as swallowing a coin. Despite recommendations that batteries be removed within two hours, it was five hours before the battery was removed from Ava-Kate. As a result, the parents say Ava-Kate suffered an electrical burn in her esophagus and required further surgery. The parents say they have spent up to $400,000 on medical bills for required treatment.

If you or a loved one has suffered similar damages or injuries, please fill in our form and your complaint will be sent to a lawyer who may evaluate your claim at no cost or obligation.
Please click here for a free evaluation of your Florida Medical Malpractice claim
Last updated on Apr-27-20

Posted by
Perry lee
on December 24, 2017
My mother had a stroke or something the hospital never told us but i got some records she was put in a rehabilitation center and stayed almost a month they released her and she couldn't remember how to give her self her diabetic shots so i had someone go give her her shots no nurse came or anything she went to her doctor a few days later to get signed up for nurse care she told me when she gave her doctor the paper work the doctor pushed her paperwork back in her purse and told her to come back Friday she passed two days later i went to the doctors office after she passed and then they gave me the name of the nursing company that was supposed to be seeing her everything was done wrong and we were told that since noone there were 25 or under we couldn't sue that was Florida's law so my mother's dead and i couldn't do anything i fieled for an investigation and was told that they couldn't do anything about because the doctors was not sending them and paperwork what a crock