Were you looking for Corinthian Colleges Inc. or Everest College lawsuits?
Some for-profit education institutions have been accused of fraud for misleading students about accreditation, transferability of credits and costs associated with education. Lawsuits alleging consumer fraud a violations of state and federal law have been filed against some for-profit schools alleging students were tricked or misled into enrolling at the schools.

Send your Education Fraud claim to a lawyer who will review your claim at NO COST or obligation.
GET LEGAL HELP NOW 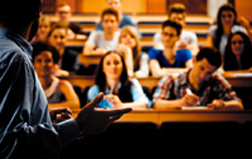 Some for-profit schools, including Everest College in a lawsuit filed in 2010, have been named in lawsuits alleging they systematically misled students into taking courses at their institutions. Among the allegations made are that students were lied to about the school's accreditation and about the transferability of credits from the schools. As a result, students enrolled in the schools believing their courses would be recognized or transferable to other post-secondary institutions, only to find out that was not the case.

Furthermore, some colleges are alleged to have lied about the cost of their programs, giving students an estimate for course costs, but then having students apply for loans for much more than the estimates given.

In 2011, the Department of Justice filed a lawsuit against the Education Management Corporation alleging, among other things, that recruiters made exaggerated claims about career placement to entice students to enroll, even if the students were not qualified.

In 2013, a jury awarded a plaintiff $13 million in her lawsuit against a for-profit school, after she alleged she was misled about the program she enrolled in, according to Consumerist (6/21/13). Among the allegations were that she was told she was in one program but was really in a program for a different job and would require more training. When she continued with her training she learned her certification was not required for the job she wanted.

In 2010, the Government Accountability Office (GAO) investigated for-profit colleges. While investigating 15 for-profit colleges, the GAO found that four colleges encouraged fraudulent practices and all 15 made deceptive or questionable statements to undercover applicants. These included exaggerated potential salary for graduates, false or misleading information about a program's length or costs, pressuring students to sign an enrollment contract before allowing discussion with a financial advisor and repetitive recruitment phone calls.

Various for-profit schools have been accused of misleading students into taking programs they did not need for the jobs they wanted, lying about courses being transferable to other schools, lying about their accreditation, and/or misleading students about the costs associated with their programs. It is only after students are in or finished their programs that they unnecessarily spent money on programs they did not need or that would not get them the jobs or qualifications they wanted.

If you or a loved one has suffered similar damages or injuries, please click the link below and your complaint will be sent to a lawyer who may evaluate your claim at no cost or obligation.
Please click here for a free evaluation of your Education Fraud claim
Last updated on Mar-1-14

Santa Clara, CA: A $100 million settlement has been reached between DeVry University and the Federal Trade Commission (FTC) over allegations of for-profit education fraud, specifically, that the for-profit university used false statistics about its graduates’ job placement rates in order to lure students and increase enrollment.

This is where other former students has found help and support.

Just recently, I found out that Zenith bought Everest out but they are just as bad as Everest. I had a career adviser that called me. His name is Pedro Fernandez. He promised that he would not leave me high and dry just like Everest. He gave me one mock interview and promised that there will be more. I did not hear from him for weeks. I told him the last time we spoke that I was fighting FAFSA so I do not have to pay my student loans back. I just emailed Pedro after not hearing from him for a long time asking for my transcripts because FAFSA needed proof of attendance. After about a day, he emailed me back and said that he has been reassigned to another part of the country and that he transferred my email to a representative in Oregon. I had to email him back to get the contact information of that representative because he did not give it to me. Apparently, his name is Douglas Lanier. I have been trying for over two weeks to get in touch with this guy and he still has yet to call me back or email me.

The reason I am emailing you is because I know you are good at what you do and getting the word out about Everest mistreating their students. If you know anyway you can help me or get me in touch with someone that can, please let me know. I am really upset because I was so proud of myself for finally accomplishing something and now I do not believe I accomplished anything. I just wanted my kids to be proud of me.

I greatly appreciate all of your help

I want to be part of this class action lawsuit

Posted by
Yolanda mercado
on October 8, 2015
I went to Everest April 2009 Skokie.Il in hopes to find a Job being a single Mother having a hard time raiding three kids, Boy was Everest a BIG MISTAKE !!! Not only did they give me false hope. I struggled trying to find jobs, trying to pay back all the debt I was now in. I tried to reach out numerous times for help but still until this day no one has helped me. I could not pay back all this money and bring a single mother no one cares I received numerous calls. These past three years they kept my income tax checks in which I was looking forward to all year, to help me and my kids to survive and nope they took my money.
They are so misleading and need to be shut down I would like to be part of this action lawsuit against Everest College.
Posted by
miss Jones
on August 18, 2015
I went to Everest in 2007 when i got laid off. BIG mistake! Not only did they give me false hope, i was an adult living on my own and was told my mom had to co-sign. Here it is years later and NO-ONE ever tried to help with job placement. The debt collectors call all day, they're rude and speak in an unprofessional manor. They try to use scare methods to make you pay them. Also come to find out they had been garnishing my mom's disability payments. We had been trying to find out who was doing it but we never could. I didn't find out until after she'd died in 2012!!!!
These people should be SHUT DOWN permanently!
Posted by
Minnesota
on October 17, 2014
I was enrolled in their business management program for my bachelor’s and on August 29, they closed with only a week’s notice. I had 99 credits and was supposed to graduate in March of 2015. I tried going to another college but they are only willing to take 36 credits because not all of the classes were transferable. I am now $36,000 in debt and without a degree.
Posted by
Maryland
on April 13, 2014
I enrolled in April 2009 to get my bachelor's degree in legal studies. I then switched to human resource management. After graduating and receiving my degree, I e-mailed the provost to tell him there was an error in my degree that stated Bachelors in business management instead of what I signed up for -human resource management. I was told they don't offer that degree. I explained to him that's what I signed up for and on my classes my major is listed as human resource management. I sent this information to higher education in early 2011 directly after the back and forth e-mails with the provost. I could have gone to another college that would have given me the degree I sought, as opposed to being stuck with student loans and a degree in a major I didn't want.