Personal Injury: Lights Out in Wisconsin

When personal injury results from the alleged negligence of others, negligence law assures that justice will prevail. In the case of a high school teacher from Milwaukee who was injured due, it is alleged, to an improperly installed lighting system a personal injury attorney helped him win a $350,000 compensation package. 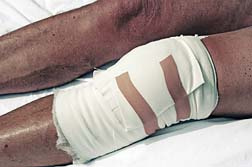 It is not known if the defendant would appeal and seek a reversal of the jury award, although it would appear as if the dispute—in spite of a jury decision—is not resolved just yet.

According to the lawsuit Ryan Bishop was teaching at River Falls High School in Milwaukee, Wisconsin when he entered a physical education storage room at the school in October 2004 to repair hockey sticks. However, after about 15 minutes the lights suddenly went completely out.

Knowing that the lighting system in the storage room was activated by motion sensors, Bishop stood up and begin gingerly moving around the room—in complete darkness—in a failed attempt to activate the motion sensors and trigger the lights. According to the plaintiff's attorney, following the failure of the motion sensors Bishop was in the process of feeling his way gingerly towards the light switch when he suddenly tripped over a jump-rope rack he was not able to see, and fell hard to the concrete floor. Bishop suffered knee and back injuries in the fall.

Bishop sued, alleging that the motion sensors for the lights were not installed properly.

River Falls High School was built with the former Westra Construction Inc. of Waupun serving as the general contractor. B & B Electric Inc. of Eau Claire installed the sensors that activated the lights for the room in which Bishop fell. The new school was finished in 2001 and turned over to the local school district in 2002. The accident happened nearly three years later.

Attorneys for the defendants indicated that the building was under a 12-month warranty when initially released to the district. Lists of deficiencies were addressed and final walk-throughs were conducted. The defendant's position was that beyond the 12-month warranty period and final inspections, the contractor and sub-contractor(s) should not be held liable.

According to Bishop's lawyer, the plaintiff reported the problem to school officials before the accident happened, although it wasn't clear when that communication took place. Legal counsel for B & B Electric Inc. suggested that their client had never been contacted with regard to a potential problem with the lights.

However, "the issue here is whether the contractor and subcontractor should have been in better contact to begin with," attorney Dean Rohde, attorney for the plaintiff, said in a statement. "The sensors were installed wrong. They weren't done according to final drawings. Can you do something wrong and, after the warranty period, just walk away and wipe your hands?"

Bishop brought his lawsuit against River Falls High School, but also named B & B and Westra in the action. Were Bishop to pursue the school alone, the only recourse he would have as an employee of the school would have been under worker's compensation benefits.

As it happened the jury found the school to be partially responsible, but did not attach a financial penalty.

For that, the jury went after Westra and B&B, which found both companies negligent in the case. Westra failed in 2005 and is no longer operating, but can still be held financially liable through its insurance provider, WEA Insurance Corp. of Madison.

Whichever way the dominoes fall in the end, the fact remains an individual sustained personal injury through no fault of his own. Regardless of whether the original jury verdict stands, or the liability is shifted to different defendants, negligence law is established to protect the rights of the innocent from the alleged deficiencies and negligence of others. A personal injury attorney can best advise you of your options, if you have been hurt and your health compromised through the negligence of someone else.