No Patience for Medical Negligence: Patients

Negligence law, together with medical negligence, remains one of the most frustrating aspects of living in not only a developed nation, but one of the superpowers of the free world and a caretaker nation. Other parts of the world look up to us here in the US. And yet the medical negligence attorney is kept hopping when innocent people are harmed in a medical setting and trust in our health care system goes down the tubes. 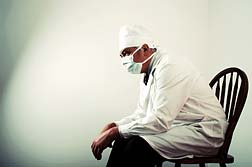 A tube, it turns out, that likely wasn't properly cleaned and sanitized before it got to you.

This week the country was appalled after learning that patients at 3 VA facilities around the US were notified with regard to possible contamination for HIV and hepatitis B and C. Upwards of 10,000 veterans in Tennessee, Georgia and Florida were notified of the possibility for infectious disease contamination. Testing would have to be done.

While the odds of contracting a life-threatening disease are slim, according to the experts, the fact remains that 10 patients have tested positive—far, far worse than the odds. Even though their positive tests have so far not been directly linked to the botched handling of what should have been sterile equipment, the writing is on the wall nonetheless.

This is not the first time medical negligence has happened this way. A franchise of endoscopy clinics in Nevada last year were scrutinized, and one was closed down completely after patients were notified that they may have been put in danger of contracting an infectious disease from someone else, simply by having a procedure done with what turned out to be unclean equipment.

The lawsuits are flowing over that debacle.

Other clinics have been found to re-use syringes, thereby allowing for the possibility of cross-contamination with potentially infected body fluids of another patient.

Why this is happening is one for the investigative journalists and the lawyers during the discovery phase of trials. Staff cutbacks, together with the need to push more patients through the system for Medicare billing have been cited. Clinic principles have been accused of spending more time watching the bottom line and profit margin than keeping a close eye on sound medical protocol.

A spokesperson for the Department of Veterans Affairs indicated this week that the VA takes responsibility for the lax procedures at its three VA facilities—as well it should. The Miami Herald, in a scathing editorial the other day, characterized the failure to properly clean and sanitize equipment between patients as unforgiveable and unacceptable. What's more, when the initial alert was issued early in the New Year the Miami-based VA facility indicated that all was well. A subsequent check weeks later revealed lapses in its protocols.

How many patients would have, or could have been put at risk during those fateful weeks between the first and second check?

Sound medical practice and protocol aside, common sense would dictate in this age of HIV that the failure to properly clean and sanitize a piece of equipment after it has been used intimately within the nether regions of one patient and exposed to the bodily fluids of that patient, is beyond belief.

And yet it happens. It also happens that life-threatening bugs get passed to patients in hospitals from the soiled hospital gowns and lab coats of doctors and nurses, or while hitching a ride on a medical professional's hands that are not washed between patients. It has also been found that patients suffering from highly contagious and life-threatening diseases have passed those risks onto others after a hospital room was not properly cleaned and scrubbed down between patients.

The latter lapses in sound sterilization procedure have contributed to the rise of MRSA superbug rates in hospitals. Healthcare centers are now getting with the program by mandating sound hand-washing practices, scrub disposal and other sanitizing procedures.

But that's not proving to be the case. Little wonder there are so many lawsuits, as patients putting their trust in the healthcare system are let down time and again by people who should know better.

More NEGLIGENCE News
You go to a clinic in an effort to be proactive with your health. You go to a hospital to be made well, by individuals who have been schooled in the fine art of healing. Germ eradication and control is just one aspect of that, but an oh-so-important cog in the medical machine. Controlling infection is the basic foundation upon which healthcare fundamentals are based.

Forgive the patient, therefore, whose life has been put at risk by someone in a trusted clinic or hospital, not doing his job. Forgive the parent for wanting to sue those responsible for compromising the health of a child, parent or loved one.

Negligence law is there for a reason and a medical negligence attorney is schooled in the legal issues associated with medical negligence. It's a sad day when someone has to sue a clinic, or a hospital for negligence. But given the cost of healthcare today, more often then not a lawsuit goes beyond the mere pursuit of justice.

All too often it's a matter of survival.