A new state negligence law in Louisiana that relates to dog attacks could give victims more options when pursuing negligence liability and potentially, a negligence lawsuit. The 'Luna McDaniel and Michael 'Blaise' Landry Act' is named after an 83-year-old woman and a 4-year-old boy, both of whom were mauled to death by dogs within the past year, according to a report in today's edition of the New Orleans Times-Picayune. 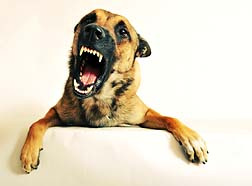 The new statute, which takes effect today, is meant to help protect people like Leonard Garrett and his wife Beulah. The couple, in their seventies, suffered an unprovoked attack in the front yard of their own home by two pit bulls belonging to their next door neighbor.

The dogs were later destroyed, as they were deemed unsafe by officials with Jefferson Parish animal control. But that's little consolation for the Garretts, who sustained injuries to their hands and arms. Leonard is recovering at home, but his wife is still in hospital and could be there for another week or more.

The new state statute now makes dog attacks a criminal offense punishable by up to six months in jail and fines of $500.

According to Blaine LeCesne, a professor with the Loyola Law School, most dog bite cases are litigated in civil court where the standard of negligence is doing something other than what an ordinary, careful person would do under similar circumstances.

More NEGLIGENCE News
Criminal negligence, on the other hand suggests a "gross deviation" from the ordinary, together with having a conscious disregard for substantial and unjustifiable risk. Repeated failure to secure a dog known to be dangerous is one example.

In LeCesne's view the updated state statute is a signal that dog owners will face a greater accountability for their pets and will face the music when innocent people are injured, or killed at the jaws of a dangerous dog.

"It's tantamount to criminal behavior to allow an animal out if the animal has evinced vicious propensities in the past," he said. "It's no different than waving a gun in a crowded room."

Because the dog attack happened prior to the new statute coming into law, the owner of the two dogs that attacked the Garretts will not be affected. It is not known if the victims will attempt to sue their neighbor for negligence with the aid of a negligence attorney.