A woman who slipped and fell while entering a corner gas and convenience store was awarded more than $12.2 million in damages for negligence by a jury in Hampton last month...her world changed forever.

In 2003, Annette Ritzmann, a master cosmetologist, was running European Beauty Concepts, a spa with more than 25 employees. Her world changed forever when one day in August, she stopped to get gas and a paper at the corner store. As she walked into the Miller Mart, she slipped on a small puddle created by a leaky awning, fell forward onto her chest and chin, and lost consciousness. A witness said the impact sent her head snapping back.

Miller Mart's owners, Miller Oil Co., admitted they had known the outside curb was dangerous. 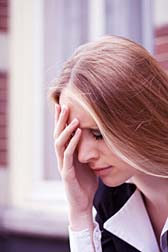 Ritzmann returned to her job some days later, but found herself unable to concentrate or do many things at once. She began to suffer seizures. Where previously she had run the business, and also worked at the spa as a stylist, after the accident she found she was no longer able to do her job.

Her doctors said she was suffering from "post-concussion" symptoms.

At the urging of friends, Ritzmann consulted a lawyer, Stephen Smith, who, with attorney Edward Scher, took the case to trial.

More News
The effect of the brain injury on Ritzmann, said Smith, was that she "died and a stranger emerged to her family and co-workers." He likened her loss of the ability to multitask to that of a violinist losing three fingers. He says he believes that the $12.2 million plus award is the highest ever slip-and-fall verdict in Virginia history.

"There is no prosthetic brain," says Ritzmann's lawyer. "You could give her $100 million—it's still not going to replace the brain cells she's lost".

If in doubt, call your lawyer
Lawyers commonly advise accident victims that the full extent of an injury will only be known after a period of months, or even years. It is common for an injured person's lawyer to file the lawsuit soon after the accident, although the lawyer cannot obtain the necessary medical reports, settle the claim or, if necessary, go to trial until the extent of the injury is clear.

As the Ritzmann case illustrates, what looks like a small injury can have devastating consequences.

If you have been a victim of negligence causing bodily harm, please send your complaint to a [Negligence lawyer] who will evaluate your claim at no cost or obligation.
Request Legal Help Now

Posted by
sharon dixon
on July 29, 2016
I fell at a supermarket. Injured my face, re- injured my hip, and entire right side of my body. The managers of the store own responsibility because it occurred on their premises. How much should I settle for in injuries and compensation?