Medical Negligence a Case of Knowing Right, from Left

Medical negligence cases are a frustration for everybody. For the doctor, it's an affront to his or her reputation; for the patient, it represents a feeling of betrayal by the medical community, an entity that we trust implicitly with our health. But the world is far from perfect, and when medical malpractice negligence happens, a medical negligence attorney won't be far away. 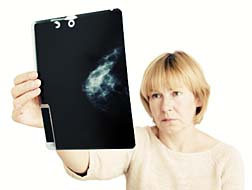 Such a betrayal wouldn't be far from the mind of Pamela Rock, an eastern Iowa woman who is of the belief that doctors failed in their duty to diagnose her breast cancer.

According to an account in the Des Moines Register, Rock first noticed a lump in her left breast in May 2002 and consulted Dr. Rose Warhank. Warhank, in turn referred Rock to the Center for Breast Health, located in Davenport. When she visited her doctor a month later for follow-up, Rock was told that her mammogram was normal, and not to worry.

A month went by. When the Breast Center had Rock back in for a follow-up with regard to her right breast, a technician reportedly told her that she did not require an ultrasound, as a spot which was apparent in a previous mammogram, no longer appeared to be an issue. Rock claims she reminded the technician at the time that the lump was in her left breast.

Another doctor, Dr. Robert Hartung of the center for Breast Health, also reviewed the radiology for Rock's right breast. In a letter dated June 5th of 2002, Dr. Hartung advised Rock that her right breast was clear.

There didn't appear to be any mention of her left breast, and Rock remained concerned. Thus, she sought the opinion of another doctor in September of that year. While this doctor suspected that the lump was probably benign, Rock was sent to see another specialist, who promptly diagnosed cancer in Rock's left breast.

The very next month six lymph nodes were surgically removed, five of which were cancerous. A later procedure saw the removal of six additional nodes, one of which was diseased.

Rock eventually pursued a lawsuit, alleging medical negligence for failing to diagnose the cancer, and allowing the disease to spread to her lymph nodes. However, she initially ran up against the statute of limitations, which allows for a two-year window for a qualifying lawsuit to be filed.

Or, at least the interpretation of the statute. When Rock filed her lawsuit October 5, 2004 a Scott County judge and the State appeals court both found that Rock had missed the deadline, based on the initial examination, which occurred in May of that year.

However, the Iowa Supreme Court overturned that opinion and sided with Rock, concluding that the initial examination of a potential medical problem is insufficient to trigger the two-year limit.

More MEDICAL NEGLIGENCE News
"If we were to hold the statute of limitations begins to run at the start of an investigation into the existence of a possible injury, then the statute would always be triggered," before the victim knew about his or her ailment, Justice Michael Streit wrote.

Given that the medical malpractice negligence suit was filed on October 5th 2004, and the diagnosis of cancer was made October 8th 2002, her medical negligence case falls within the two-year statute of limitations window, and Rock's medical negligence attorney can go ahead with the case.

A case that goes beyond right and wrong, all the way to knowing right from left…

If you have suffered losses in this case, please send your complaint to a lawyer who will review your possible [Medical Negligence Lawsuit] at no cost or obligation.
Request Legal Help Now