Prepaid debit cards and the related prepaid debit card fees are akin to "buying a house without getting to look around inside," said New Jersey Senate President Richard Codey (D-Essex). "You have no idea what you're getting into until it's too late." 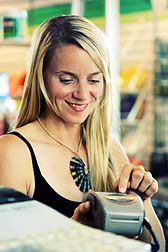 The New Jersey lawmaker plans to ask Congress next week to push for regulations that make debit card fees more transparent. He will introduce his resolution when the New Jersey state senate reconvenes on November 23, he told the Star-Ledger.

He noted that while President Obama tightened the rules on fees for credit cards and gift cards, no such update was forthcoming for prepaid debit cards.

Prepaid debit cards, Green Dot Visa among them, afford the consumer an opportunity to manage their funds by purchasing debit cards loaded with their own money. Many consumers gravitate to the prepaid debit card as a preferred means to cash their paycheck, rather than pay the sometimes-exorbitant fees that are often associated with check-cashing boutiques.

However, according to Codey, there are so many activation and reload fees—more often than not buried in the fine print—that it amounts to a "tax on the young and the poor." Consumers with little or no credit and no access to a bank account "turn to these prepaid debit cards as a means to get by," Codey told the Star-Ledger. "Instead they end up sitting around helplessly as they watch their hard-earned money get eaten up by hidden fees."

Prepaid debit cards have been around for about a decade, but their popularity has soared in recent years. A spokesperson with Mercator Advisory Group noted that consumers loaded $8.7 billion onto prepaid debit cards last year. That could jump to $119 billion in just three years.

More PREPAID DEBIT CARD News
A study of 18 prepaid debit cards completed in August by Consumers Union found activation fees ranging from $3 for the Wal-Mart Money Card to $99.95 for MasterCard's Millennium Advantage Card. Monthly fees ranged from $2.95 to $9.95, while withdrawal fees ranged from $1.50 to $2.50. There were also fees for balance inquiries, customer service, overdraft and inactivity.

Mercator spokesperson Brent Watters defended the prepaid fees as by and large fair. "It's a very thin-margin product. No one's making a load of money here," he said.

The Network Branded Prepaid Card Association, which represents more than 30 prepaid card companies including Discover, American Express and Visa, commissioned a study of 400 prepaid debit card users in March and found that 72 percent said the fees were fair.