Roaches and a Rat found at ConAgra Peanut Butter Plant

Lawyers who inspected the ConAgra peanut butter plant that was linked to the recent salmonella outbreak reported finding a dead rat, rattraps and roaches at the plant. The roaches were found on raw peanuts. In addition, the attorneys found bird feathers and other things that are "consistent with salmonella." 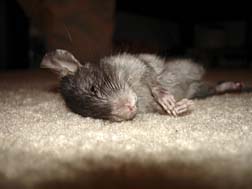 The plant was closed on February 14 in the wake of the salmonella outbreak, which led to 425 confirmed cases of the illness. Peter Pan and Great Value peanut butter were pulled from the shelves in a massive recall that cost ConAgra between $50 and $60 million.

Meanwhile, more lawsuits have been filed against ConAgra foods. A couple from Kentucky has filed a lawsuit claiming they became ill in early February after eating the contaminated peanut butter. They were both so ill that they wound up in the emergency room where a doctor diagnosed them with food poisoning. Their lawsuit asks ConAgra to pay the couple's medical bills and other punitive damages.

Families who were affected by the contaminated peanut butter urged lawmakers to strengthen regulations governing companies involved with supplying food. Consumers are growing concerned with the recent incidents of contamination. In addition to the peanut butter salmonella outbreak, spinach was recalled from store shelves after it was contaminated with E. coli last year. In March of this year, millions of cans of dog and cat food were pulled from the shelves because they were made with contaminated wheat gluten.

Trust in the Food and Drug Administration (FDA) may also be waning as reports come out that the organization knew about problems at the ConAgra plant two years before the contamination occurred. The FDA actually investigated complaints about salmonella in 2005 but did not follow-up on requests for specific documents. According to a report, the FDA was looking into findings of salmonella in peanut butter that was related to new equipment. The report goes on to say that insects were found in some equipment and water leaked onto the product. The investigators then requested documents from ConAgra, which the company asked the FDA to put in writing. The FDA did not do so, saying that it did not see anything that was truly dangerous.

Posted by
Michael; L. Rogers
on May 12, 2013
I, Michael L. Rogers was overlooked in a lawsuit against the maker of Peter Pan Peanut Butter made by ConAgra Foods !! I bought the jar from Walmart here in Bradenton Florida on Feb . 8, 2007 . I ate 1/2 the jar on the 9th .When I woke up on the 10th I thought I was going to die . Nothing ever could compare to that pain ,It was like a butcher knife being push down the middle of my skull !!!! I hope no one will ever have to experience the kind of pain salmonella poisoning feels like !!I prayed to God for 3 hours of relief until the clinic would open here in Bradenton !! The Doctor knew that I had food poisoning . He prescribed penicillin antibiotic (AMOX-CLAV 875MG TABs. I took all 20 in 10 days . Lawyer John H. Ruiz in Miami, started a class action . I joined it and sent the jar with the product code 0n the lid (2111). I have proof of Fed EX paperwork from that and all the proof from the Doctor. Also the proof of meds I took . What I am trying to find out is why this law company has stop contact with me and probably many others . I am asking for YOUR help in find out what has happened with my class action . Thank You