Defective products are the bane of a manufacturing industry that some argue has invited consumer angst by importing so many manufactured goods from China. Now, weary Americans wary of defective product personal injury only adds to the economic stagnation. A massive fitness ball recall doesn't help and just may create more work for the defective products attorney. 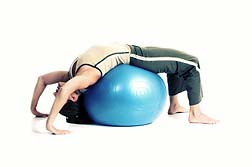 The fitness, or stability ball has evolved into a popular activity for fitness buffs. Filled with air, the devices serve as a platform and aid in toning.

If they burst however, you're on the hard floor in a hurry. And that's been the case for 47 users who have suffered bruises and even fractures when the fitness ball beneath them suddenly burst.

According to the US Consumer Products Safety Commission (CPSC), the recall involves rubber fitness balls sold in 55, 65 and 75cm diameter sizes. The fitness balls were sold with a pump and inflation instructions and came in various colors with the Bally Total Fitness, Everlast or Valeo logo printed on the ball.

The products were sold at department stores and fitness retailers nationwide from May 2000 to February 2009 for between $15 and $30.

The fitness balls were manufactured in China.

While the issue surrounding the EB fitness balls is classified as a recall, only products which have actually burst will be accepted back by the company. For stability balls that are still intact, the company will be providing updated inflation instructions in an effort to prevent further breaches and bursts that could cause personal injury.

The affected stability balls will remain in stores.

A fitness trainer in Northwest Washington DC commented to WUSA 9 TV that he uses stability balls to enhance the toning power of pushups, squats and abdominal crunches. "You want to inflate it to 75 to 80 percent. You don't want to inflate it to its maximum," says Rexx Samuells. "And then you want to wait about 24 hours until you actually use it."

It is not known if the original inflation instructions mentioned that fact.

It was been reported that a label on the balls refers to the product as being 'burst-resistant.'

Rick Kaselj, a practicing Kinesiologist and certified personal trainer in Canada writes on his blog that he saw a fitness ball that was sitting in a corner and not being used suddenly burst into two halves. He did not mention what brand may have been involved with that particular incident. However, he describes a series of precautions that relate to the proper inflation protocols of stability balls, some of which encompass percentages of total inflation and room temperature.

More DEFECTIVE PRODUCT News
It is not known if any of the parties injured when a stability ball burst have opted to sue the manufacturer. However, the fact remains that a sudden fall to what is often a hard tile, or concrete floor can result in either temporary, or permanent injury. Either injury could prove devastating to a job, or to the livelihood of a family.

Many of the boxes containing the new, deflated stability balls have the words "burst-resistant' clearly marked.

When defective product personal injury befalls a consumer who has purchased a product in good faith, it makes a very good case for compensation. Manufacturers are usually made to stand by their products, regardless of where they were actually made. Sadly, defective products have become a byproduct of a global economy whereby manufacturers with respected names commission the actual manufacture of a product in some offshore country in an effort to control costs. Quality often suffers.

If you have suffered because a manufacturer has dropped the ball, a call to a defective products attorney would be prudent.