Defective products provide continuing frustration for consumers, in tandem with manufacturers of goods that continue to look towards the lower labor costs associated with manufacturing overseas. Poor quality often results, and consumer safety is often put at risk. Defective product personal injury cannot only be frustrating, it can also be heartbreaking, especially when a child dies. A defective products injury attorney is often the only recourse to whom a parent, or a consumer can turn to achieve any kind of justice. 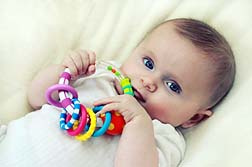 A walk through the US Consumer Products Safety Commission (CPSC) website can be both depressing, and enlightening. There you will find stacks of recalls—toys with violations of lead paint standards (all imported from offshore countries), or appliances that can catch fire.

The latest recall involves the expansion of a previous recall for infant rattles that could provide a choking hazard. In March, 20,000 Infantino Lion and Lamb Grabby Rattles were recalled out of concern that the tail piece on the rattles could detach, posing a choking hazard.

This past week, a further 131,000 of the rattles were recalled. That's because since the initial recall was announced in March, there have been 10 reports of the tail pieces detaching. Thankfully, there have been no injuries, or deaths reported.

At least, not yet. And you'll never guess where these darling little rattles were made. Yes, that's right.

The recalled rattles are shaped like a lamb, and lion respectively, and were sold at Wal-Mart, Babies 'R' Us and other specialty stores from May 2007 through September 2008 for about $3 or $4. It should be noted that rattles that do not feature tails on the animals, or products with production codes of 0108 and 0508 are not affected by the recall.

On the eve of the Inauguration of the 44th President comes news that Public Citizen, the well-known consumer advocacy group, sent a communiqué to the Obama Transition Team deploring the record of the outgoing Bush Administration with regard to consumer safety. Specifically, the consumer group deplored "the abusive practice of inserting language in the preambles of, or in federal regulations for the purpose of immunizing manufacturers from liability for injuries caused by faulty products.

"Through these preambles, the Bush administration has been attempting to block consumers from holding manufacturers accountable for harm caused by hazardous drugs, medical devices, motor vehicles and other products."

Public Citizen makes the point that with current legislation, a manufacturer only has to meet a bare minimum of the safety threshold—the example was used that a new drug is assured to be anything but snake oil—after which the manufacturer is considered immune from all liability and harm caused by a defective product.

Public Citizen wants the Obama Administration to turn that around, and return the onus onto the manufacturer for providing reliable, and safe products for the consumer, rather than simply fattening the coffers of business.

If there ever were a poster child for the defective product, little Kenny was it.

Kenny didn't make it to his 2nd birthday, after ingesting a series of small magnets from a Magnetix toy his older brother was given as a gift. Even though the older boy was careful to put the Magnetix toy up where his younger brother couldn't reach it, no one realized that the plastic Magnetix pieces were not sufficiently robust to reliably contain the small, round magnets. It was later determined that several of the magnets had come loose and fallen into the carpet, where the innocent tot swallowed them.

More DEFECTIVE PRODUCTS News
The magnets formed a blockage in his intestine, and had begun to corrode. A bulbous formed, and gangrene set in. By the time the lad was rushed to hospital with a fever and flu-like symptoms, it was too late.

It was later observed that had little Kenny, who died in 2005, been treated with an MRI the consequences could have been devastating. With magnets inside his body, the MRI could have caused instant death, and risked an explosion that could have harmed everyone in the room.

Will the incoming Obama Administration raise the bar on toy safety, and bring the hammer down on defective products? Time will tell. In the meantime, if you or a loved one has suffered defective product personal injury, it would serve you well to take up the matter with a defective products injury attorney. Companies who have such concern for their bottom line that they are importing defective products, often made in foreign countries using cheap labor, should be held accountable.

If you have suffered losses in this case, please send your complaint to a lawyer who will review your possible [Defective Products Lawsuit] at no cost or obligation.
Request Legal Help Now