Louis Ling, the executive director of the Nevada Board of Medical Examiners, recently said that Botox injections being administered by medical assistants was a common practice throughout the state, and that it should stop. 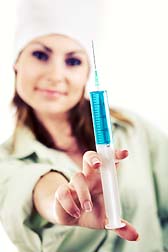 More BOTOX AND MYOBLOC News
"I think it was just ignorance of the statutes that allowed this to happen," Ling said. "The reason I knew it was because I used to be with the Pharmacy Board."

Illegal administration of drugs in Nevada is a felony.

Part of the reason Botox injections for wrinkles may be better handled by a doctor is the serious side effects associated with the skin-smoothing drug. Some people have experienced swallowing and breathing problems from taking Botox.

Earlier this year the Food and Drug Administration ordered that black box warnings on Botox were required, which is reportedly a warning usually reserved for drugs that have caused heart attacks or strokes. The FDA said the label is necessary because Botox can potentially spread to other parts of the body.

If you or a loved one have suffered losses in this case, please click the link below and your complaint will be sent to a drugs & medical lawyer who may evaluate your Botox and Myobloc claim at no cost or obligation.
Request Legal Help Now