Botox is fast becoming a tale of two extremes, as sales figures increase and popularity soars, even though concern over serious, and potentially deadly adverse reactions continue to reverberate through medical journals and the media. 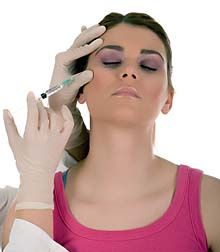 The concern centers on the potential for Botox and Myobloc to migrate away from the original injection site, sometimes with disastrous consequences. Sixteen deaths have been attributed to botulinum toxin, although it has been reported that 15 of the 16 deaths were the result of powerful therapeutic injections, at a strength much stronger than that used for cosmetic purposes. So far only one death has been linked to Botox cosmetic: a 47-year old woman who died from complications associated with staphyloccus pneumonia seven weeks after a Botox Cosmetic injection.

However, there have been numerous reports of complications linked to injections of Botox, as the botulinum toxin—a purified form of the deadly toxin found at the root of botulism—has been found to migrate away from the injection area, only to do its work on other muscles not intended to be impacted by the particular punch that Botox delivers.

That affect is the freezing, or the paralyzing, of the targeted muscle. It was discovered some time ago that facial lines such as crow's feet, laugh lines and furrowed brow are cause by the contraction of small muscles in the face. When it was discovered that an injection of Botox paralyzes the muscle temporarily and mitigates the loathed facial line, Botox Cosmetic took off like a rocket and is still climbing with sales of $1.21 billion last year.

The problem is the fairly recent realization that the toxin can migrate away from the injection site. Were it to stay right where it was intended, concern would be mitigated. The effect lasts for about four months, and then wears off. In the interim, the Botox client enjoys a remarkably smooth complexion so long as the targeted muscles are in a state of paralysis. However, when and if that toxin migrates, muscles not intended to be affected suddenly are. This can result in anything from a drooping eyelid, to the inability to swallow. The latter has happened to patients of therapeutic Botox and Myobloc who have received injections in the neck for muscle spasms. Were the toxin to migrate down the neck towards the esophagus, a muscle vital to keeping foods and fluids away from the lungs, is suddenly in peril.

Don't discount droopy eyelid syndrome, either. Reportedly occurring in one or two percent of the cases, droopy eyelid is said to normally last for a few days or so (indeed, if it happens at all).

But there are exceptions, and Deborah Townsley was one of them. "I had received Botox injections between my eyebrows for a frown line five times (every 3 - 4 months). I didn't think it was too risky, especially since it gave me the much-desired results. Every time I read and signed the consent form which informed me of the risks, I thought they would never happen to me," she writes.

But they did. Four days after receiving the injection her right eyelid started to droop, as if she had experienced a stroke. Deborah's doctor assured her that the condition would disappear after seven to 10 days, or within two weeks at the most.

However, after two months nothing had changed. The droopy eyelid was still there. The experience left Deborah feeling depressed, and vowing never to use Botox again.

And there are other concerns. Back in March it was reported that Arnold Klein, a UCLA dermatologist and former adviser to Botox manufacturer Allergan, revealed that Botox Cosmetic patients might end up with deeper wrinkles after discontinuing injections than the wrinkles they started with. That implication was suggested in data connected with an unpublished report from a 2003 study. While the dermatologist did not dispute the safety of Botox when administered properly, Klein is reported to have said that Botox can be hazardous if misused.

That points a finger at Botox parties, which are still popular. You can even get Botox at a storefront in Manhattan now; such is the popularity of pursuing a chance to look younger without surgery.

Patients are getting younger too, and not waiting for the age lines to arrive. Brides are getting Botox injections in anticipation of their wedding day. It's not enough to look youthful. The suggestion now, is the need to look perfect.

Zoe Budd works in the music industry in North London, England. She's only 22, but has been getting Botox injections for two years. And there are reports coming out of Australia that doctors are suggesting Botox for teenagers.

More News
Regardless of where Botox is headed, the fact remains that no treatment of any kind is not without some degree of risk. And as Botox use becomes more widespread, any perceived risk is magnified by expanded use amongst a wider population.

In the meantime studies continue to point to the potential for Botox, and Myobloc to migrate, as it has been found to do in rats and cats. Botox has not only been found to migrate into area muscles, it has also been found to invade the brain in lab tests.

The magic elixir, that smoothes wrinkles and takes years off your face is no longer the sole jurisdiction of the rich and famous. Vanity crosses all demographics and economic lines now. But the magic lasts only until the next time someone's eyelids droop so much they can't go to work or can't see, or suddenly you can't manage to swallow.

Only then, is the chance for looking younger suddenly much less attractive…

If you have suffered paralysis or other side effects from Botox or Myoblock, please send your complaint to lawyer who will review your possible [Botox Lawsuit] at no cost or obligation.
Request Legal Help Now

Posted by
Jay Lamm
on January 23, 2012
I had botox in August of 2011, Four days after the injections one side of my face was perfectly smooth and uplifted. However, the procuct migrated and the right side of my face was droopy almost like a bells palsey patient.
My eye eventually completley closed. It has finally gotten a little bit better but my right eye continues to be droopy, I'm now very worried that it might be permanent.
I've gotten Botox for about 15 years with great results, but this has frightened me forever.