Dr. Arnold Klein, a world-renowned dermatologist is making it his mission to tell the public about the dangers of Botox, one of the most popular cosmetic treatments that almost everyone is familiar with in some form. Behind Viagra, Botox is the second-most popular prescription drug in the world and has served as a more cost-effective alternative to having cosmetic surgery.

Dr. Klein has stated that physicians need to be trained and educated on the proper use of Botox and that the FDA needs to be much tougher in protecting the public. There has been evidence of Botox being used improperly and he alleges that Allergan, the manufacturer of Botox, has misrepresented the data they have on the drug. 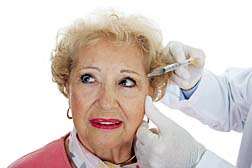 Dr. Klein reviewed a 2003 study that was submitted to the Dermatologic Surgery journal by foreign doctors doing work for Allergan. The review had to deal with diluting Botox. What the author of the review was trying to show was that certain levels of dilution not detract from the safety and efficacy of the product. However, a review of the paper showed some serious issues with the manuscript, which included graphs that showed worsening of wrinkles after the Botox wore off. The study was not published due to these various issues with the paper. At a later date, the same author submitted the same study with different results. When Dr. Klein alerted the editor of the journal, he was told that the issue would be resolved.

However, the same study still appeared two years later in an edition of Dermatology Surgery that was sponsored by Allergan. The study included the data that was altered despite the statement to Klein by the publications editor that the situation would be resolved. It may have been resolved at the moment, but did not have an impact when Allergan sponsored the review. Klein stated that he felt the data was altered to benefit the pharmaceutical company at the expense of the health of the patients.

Klein later shared his concern regarding the improper dilution of the drug causing serious risks to patients such as the drug spreading to unintended areas of the body, which could cause paralysis and even death. Shortly after Klein raised his concerns, the same foreign doctor who had conducted the study that appeared in the Dermatology Surgery journal, submitted another article about the drug Myobloc, which has also been suspected of causing paralysis and death. It is injected in the same manner as Botox. Dr. Klein and another doctor were named as the authors, although they said they had nothing to do with it and had never seen it prior to it being published.

More News
Klein's main concern is that the use of Botox is becoming more and more prevalent and is being administered by doctors other than cosmetic surgeons. Many of these doctors have hardly any training or experience with the drug, so they believe that diluted Botox is safer because of published studies with suspected altered results. Klein feels that the FDA needs to make sure that future studies that are published in American medical publications be submitted by Physicians with US medical licenses. The physician who published the reviews on both Botox and Myobloc was not licensed to practice medicine within the United States.

In February, the FDA announced that Myobloc and Botox have both been associated with swallowing issues and respiratory issues. There has been at least one death. Public Citizen, an American watchdog group, found that there have been 180 severe reactions and 16 deaths associated with Botox use in a 9 year period. There has only been one cosmetic-related death.

Posted by
Riley
on February 21, 2013
Botox can leak into the hippocampus of brain causing brain damage.
Posted by
Maxine
on February 28, 2011
Hey, I`m all for people wanting to look youthful and if Botox makes them feel good, why not, however; I have seen people who over do it and their faces look too frozen and kindof pathetic, so to those of you thinking about having it or those already who have it, try and go easy and look as natural as possible. Good luck and enjoy. Maxine
Posted by
Maximillian
on February 6, 2011
What I am most concerned with is that through the proliferation of this bizarre treatment for wrinkles (which, by the way, is easily cured by prayer and a sincere love of Godâ€”try it, it's better for all concerned!) there may soon arrive a true biohazard, as repeated skin contact during intimacy, contact with newborns, pets, will continue to increase the danger of the abusive addiction to this consumer-nazi obsession. The women I have known who use these treatments repeatedly frequently have very cold, narcissistic personalities with a very dull and naÃ®ve perception of the world, as if nothing else existed but their skin, clothes, prestige and bank accounts. It is unlikely much will be done though, because it is a great business success despite the insane behavior of those who are under its spell, a kind of hypnotic resignation to vanity and a clever way of hiding character defects, too. An old Arabic proverb says "If you are ugly inside, you are ugly outside". The pathetic conclusion is that these women actually believe it's making them happy!