Sarah Thompson's (not her real name) husband committed suicide almost six years ago after taking Zyprexa for less than three months. Even before David committed suicide, he experienced some of the stigma that comes with taking Zyprexa and attempting suicide. Thompson has also had her own problems, dealing with the reactions of people around her to her late husband's death.

While Thompson will always have to deal with the death of her husband, she notes that many people do not understand how she can still love a man who committed suicide and left her to care for their two children. "They don't understand that the medication made him different," Thompson says. "People condemn him and others who commit suicide, but they really don't have a clue what he went through. That medicine really changed him. 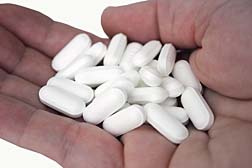 "Looking back on it, I always ask 'Could I have done more?' and I regret that I didn't take the reins and insist that the doctor stop prescribing Zyprexa. I didn't realize how strong Zyprexa was and that it wasn't for him. I didn't go with him to his appointments, but I knew he wasn't doing well. So to look at these doctor's notes and see that she reported he was improving, I don't understand if he was improving, why his dose would be increased. By Christmas he was acting strange. That was around three weeks after first taking Zyprexa."

Another problem that Thompson faced was how people reacted when her husband attempted suicide. "He actually told his doctor on the Monday before he committed suicide that he thought Zyprexa had done damage to him," Thompson says. But his concerns were not taken seriously. He felt ashamed about his overdose; he also couldn't think for himself. That's what Zyprexa did to him. But people look at you differently after they find out you've attempted suicide. David tried to get past that. Just before he committed suicide he went with me to a prayer group at church, even though he knew that everyone in the room knew about his suicide attempt. He still asked them all to pray for him."

Thompson says that some people were surprised to hear that David was taking such a high dosage of Zyprexa. "The pastor at our church studied to be a pharmacist," Thompson says. "When I told him about it, he was stunned. He didn't think David should have been on Zyprexa and not such a high dose..."

More News
Although she questions the doctor for putting David on Zyprexa in the first place, Thompson also questions whether or not Eli Lilly and the company's sales representatives play a role in how Zyprexa is prescribed. "First of all, it's psychiatrists who should be diagnosing bipolar disorder and prescribing Zyprexa, not family physicians," Thompson says. "So I think David's health care was mismanaged, because it was just a family physician who put him on Zyprexa. It was too strong for him. But, did Eli Lilly and the representatives push family physicians to prescribe it? Do they have anything to do with it? I heard later that Eli Lilly was giving Zyprexa to nursing homes even though seniors weren't supposed to be on it. I think they're treating people like guinea pigs and that really bothers me. They don't have enough proof about how well a drug works before they start giving it to people."

Thompson says that something that helps her get through is her faith, faith she almost lost after her husband committed suicide. "A lot of people believe that if you kill yourself, you'll go to hell. But if you're sick, God doesn't put you in hell if you die. That drug made David sick, soI don't believe he was sent to hell."

After David committed suicide, Thompson had to deal with a lot of questions from people. Sometimes, she tells them what happened. Other times, if she does not feel like going through the story again, she simply says, "He had a bad reaction to some medication." That may be exactly what happened. David, like so many other patients, had a bad reaction to Zyprexa and it cost him his life.

Posted by
Tatjana
on October 25, 2013
I have two episodes of getting in to hallucination first time in 2003 second time in 2011. I have been diagnosed first time as depressed person and have been given Zyprexa after I try two times with suicidal attempt , in two weeks. I survived and slowly stop with taking Zyprexa. I have been on some antidepressant until 2011 when I stoped taking them. I was OK, working normally without any problem. Got second episodes with hallucination in October 2011 and been hospitalized for second time. They again prescribed me Zyprexa and after couple of weeks I committed again suicide attempt. This time I swallowed some poisoned ( drainno ) with offuly consensuses. They removed whole my stomach and esophagus. I survived. In hospital before operation I was having same suicide taught and after my husband request they change drug from Zyprexa to CO-QUETIAPINE and that suicidal taught stop immediately. I am on long term benefit and can not work. I am struggling with some other issue, eating and swallowing food. Every month my surgeon is doing dilatation so that I can eat properly. All people that know me can not believe that I attempted suicide so many time. I am still alive but I want to report this because I knew that Zyprexa was cause to my suicide taught and attempts. I need some legal action to help me to explain to myself about all this horrible things that happened to me.
Posted by
amber
on May 19, 2011
Just yesterday, May 17th 2011, I found my beautiful, troubled fiance hanging from our balcony patio, having taking his own life. He had been suffering with depression and affective disorder for years, and had it somewhat under his control-before starting Zyprexa in January of 2011. His psychotherapist had juggled with his dosage as he painfully went through the motions: from 5 to 7 to 15 to 20 and back down to 15 mg a day. He had attempted suicide before, in 2001, which I know his psychotherapist is aware of. Apparently she didn't notice anything in the last few days, but was quick to give him Zyprexa samples and alter his dosage several times. He constantly stated that his meds weren't working, and would take Atavan throughout the day to deal.
He tried as hard as he could to cope, but he kept saying he take his brain any longer, couldn't deal with his thoughts and conscience. Not to mention, he was having a hard time at work, and relayed that to his psychotherapist as well.
The night before he died, he tried his hardest to proactively cheer himself up, but after taking his meds that night he waited until I fell asleep and hung himself.
I believe, after watching him mentally circle the drain for 4 months, that Zyprexa did not help but further exacerbated his illness, and his psychotherapist did little to address it besides throwing free samples at him. Our family is seeking legal counsel.