Sarah Thompson's (not her real name) husband, David, committed suicide on March 7, 2002, after taking Zyprexa for only three months. Thompson says she has no doubt that Zyprexa changed her husband and altered his thinking. The coroner may agree with Thompson—on David's death certificate, next to "How injury occurred," he wrote, "Prescribed Zyprexa, hung himself."

Like so many people before her, Thompson says her husband was not suicidal prior to taking Zyprexa. Before he died, David commented that he thought Zyprexa had changed him permanently and Thompson says that within weeks of taking Zyprexa she noticed changes in his personality.

"David worked in the machining industry in programming. He worked the third shift (nights) and really liked it because he got paid a bonus and it gave him time to be with our children. He was a very smart man, who was successful at everything he did and really liked challenges. He was also a perfectionist. 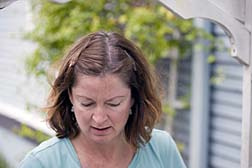 Over a period of two years, David saw people he knew, friends and co-workers, get laid off. In a short time, the company went from 80 programmers to five programmers. David developed anxiety about his friends losing their jobs and about the possibility of him losing his job. He started to get depressed.

His company had two full-time doctors, but in November 2001, David's regular doctor left because things were getting so bad with the company. So, David saw this other family doctor, who barely knew him, for anxiety, depression and lack of sleep related to his concerns about his job. On December 5, 2001 this doctor noted that he is bipolar 2 and started him on five milligrams of Zyprexa."

Thompson says the diagnosis of bipolar disorder surprised her. She says that in their time together, around 20 years, she had no indication that he was bipolar. Furthermore, they had been to marriage counseling and David had been on Prozac two times, but at no point did any other counselor or psychiatrist suggest that David had bipolar disorder.

On December 12, David went back to the doctor who noted that his depression and paranoid thoughts had improved and his appetite increased. She then increased his dosage to 7.5 mgs. However, Thompson says that David's paranoid thoughts were actually based in reality. He was worried, naturally enough, about his job. David was concerned about his ability to provide for his family if he lost his job.

On December 20, David again saw the doctor who noted that he had less intrusive thoughts and his mood was improving. Once again, his Zyprexa dosage was increased, this time to 10 mgs. But Thompson says that by Christmas everyone saw a change in David.

David's job was being changed. He was moved onto the second shift, so he had less time with his children, and instead of programming he was now running machines. "David always achieved rapidly," Thompson says. "But now he was telling me that he didn't know how to do his work. It blew my mind. He was not able to think for himself."

David's thoughts soon turned to how he could provide for his family, but Thompson says those thoughts were not usual for David. "At one point, he talked about cutting off his hand so that he could [collect insurance] and provide for his family. I told him that we would be okay, that if he lost his job we could get through it, but he shouldn't cut off his hand. But it was hard to talk to him. He didn't like taking medication, but he wouldn't listen to me when I suggested he lower his dosage. There was no reasoning with him."

More News
On February 18, 2002, David took an overdose of Zyprexa. Thompson found him and had him taken to the hospital where he was kept for five days. David was taken off Zyprexa and put on a different medication. However, David felt that Zyprexa had already caused him permanent harm. "He said 'I think Zyprexa did damage to me.' He had never been suicidal before, but now he was reporting suicidal thoughts, even after saying that he would never put his family through that again. We were all worried about him, but we couldn't reach him. Zyprexa messed up David's mind. At one point he said that he could hear the inside of his brain."

On March 7, 2002, David hung himself in his garage. Although Thompson came home and supported his body weight until paramedics arrived and revived him, David died 12 hours later, leaving behind his wife and two daughters aged 12 and 16.

"He was my soul mate, my high school sweetheart, my best friend," Thompson says. "He was a man of integrity and he was the rock in my family. He could be standoffish and have trouble making friends, but he deeply loved his family. This completely devastated us. My children lost not only their father, but also the mother they knew, because I changed after that, too."

Next: More of the interview with Sarah Thompson and a look at the stigma that Zyprexa patients and families face after suicide attempts.