As word spreads about the risks associated with taking [Zyprexa,] especially the risk of suicidal tendencies, more patients are coming forward to share stories about their experiences with the drug. The sad truth is that a drug they thought was going to help them has actually wound up hurting them. Some patients have lost their lives while others have irreversible scars and injuries as reminders of their time on Zyprexa.

Ryan Thompson (not his real name) was on and off Zyprexa a few times while his doctor tried to determine which drug was most effective for him to take. Thompson noted that he suffered many side effects while taking the drug and was hospitalized with low blood sugar levels. He also gained weight, suffered emotional distress and contemplated suicide. "But even when I thought about it, I knew it was the wrong thing to do," Thompson says. "I made sure I got help."

Luckily, Thompson was taken off Zyprexa before it did any long-lasting damage but he recognizes that Zyprexa can cause a lot of problems. "That stuff will mess a person up," he says. 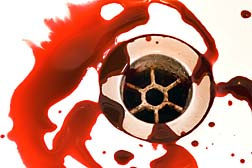 The families of people who experienced serious [side effects] after taking Zyprexa note that their loved ones changed drastically after they started taking the drug. They say that people who were once quite passive and loving became more violent and moody. Some patients became highly confrontational and their behavior grew out of control. Others lost all hope, exhibiting a sense of defeat with the energy in their eyes disappearing altogether.

Unfortunately, many patients take Zyprexa to treat the symptoms of schizophrenia, so Eli Lilly hides behind the fact that patients with schizophrenia, and other mental disorders, are more likely to commit suicide. Some patients echo this sentiment, not realizing that their suicide attempts may have been caused by the use of Zyprexa, a drug that was supposed to help them. They simply assume that the schizophrenia caused their suicidal thoughts, without knowing that other people have had similar experiences while taking Zyprexa.

As more patients come forward to share their stories about Zyprexa, more people learn that they are not alone; that others have had similar thoughts and experiences. Hopefully as the number of people who know about the risk of suicide while taking Zyprexa grows, Eli Lilly will finally take full responsibility for the damage its drug can cause.