Now we know there is a corelleation between Zyprexa and suicide, people who may not have realized that their suicidal thoughts were related to Zyprexa, now understand that they may not have been in control of their thoughts and actions at all. Unfortunately, some patients, including youth, have committed suicide while taking this medication and even though their families can file lawsuits against Eli Lilly, nothing will bring these victims back.

One website, [psychdrugdangers.com] makes available the FDA's Adverse Event Reporting System. The website claims to have a listing of Adverse Event Reports made "between 2004 and 2006 where the listed psychiatric drug was identified as the Primary Suspect Drug responsible for causing these reactions." If this website is accurate, the number of suicides and suicide attempts by people who were taking Zyprexa is alarming and is not something that should not be ignored. 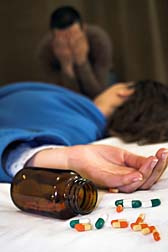 Simply selecting Zyprexa and the age range 20-24 years old brings back all the adverse event reports the FDA received regarding people in that age range who took Zyprexa. In the first six listed reports, three involve completed suicide. In fact, on the reports page, 17 people are listed as having completed suicide, an additional 13 attempted suicide but were not successful and five reported suicidal ideation. That is only for the 20-24 age range.

More News
When you include all age ranges, according to psychdrugdangers.com, between 2004 and 2006 the FDA received reports of 149 completed suicides, 119 attempted suicides and 104 cases of suicidal ideations. Compared to the number of people who take Zyprexa, that may not seem like a lot. But remember, the FDA does not receive reports of every adverse event associated with a drug. In many cases, people may not report a suicide, thinking it was linked to the patient's condition rather than the drug he or she was taking at the time. So the FDA may only know about a small portion of people who committed suicide, or attempted to, while taking Zyprexa.

Children as young as nine years old are reported as having suicidal ideations and attempting suicide after taking Zyprexa, and two who were only 14 years old committed suicide while taking the drug. No one should feel that they have to take their own life, but nine years old is far too young for anyone to attempt suicide. That type of risk is entirely unacceptable.

Eli Lilly is putting patients' lives at risk by not properly acknowledging that its drug can cause people who are not normally suicidal to attempt to take their own lives. Unfortunately, not nearly enough people know that there is a chance that Zyprexa could cause such a reaction in patients and many do not realize that their loved ones died because of the medication they were taking.