Andrew Blount, a young computer analyst living in the UK, went to his doctor on September 9 complaining of what he thought was pink eye. The next day he was in the hospital, beginning a journey that has seen the 31-year-old fighting for his life with the most serious form of Stevens Johnson Syndrome, TEN (Toxic Epidermal Necrolysis). A new medication Blount had been taking was deemed to have served as the catalyst for the horrific reaction. While the particular medication was not identified, Zithromax side effects have included Stevens Johnson Syndrome in previous cases. 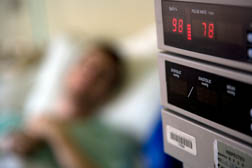 It’s also ironic that had Blount been diagnosed with pink eye, as he suspected, he might have been prescribed Zithromax. Azithromycin is sometimes prescribed to treat bacterial forms of pink eye.

Regardless of the particular trigger involved, the fact remains that Blount was admitted to the hospital September 10 on a journey that turned dire very quickly. Originally admitted to Cowichan District Hospital, the young husband to Teresa was transferred to Royal Jubilee Hospital in Victoria for more intensified care.

His condition quickly worsened, as it does with Stevens Johnson Syndrome (SJS) and TEN. SJS and TEN are rare but devastating allergic reactions usually triggered by medication. There is no pattern. In Blount’s case, his TEN was deemed to have been triggered by a medication he had never taken before. But there have been other cases where individuals who have taken a particular medication successfully in the past with good tolerances, suddenly react without rhyme or reason.

SJS and TEN begins with a rash that quickly escalates to blisters and the sloughing away of large sheets of skin. The condition has been likened, by many in the medical community, to burning from the inside out. It is no coincidence that most SJS and TEN victims are treated in burn units.

Blount was soon hooked to a ventilator, fed by a tube and sedated while doctors undertook the arduous task of treating Blount as TEN ravaged his body. The principal in his own computer enterprise, Blount had to shut down his small business while battling TEN. His wife Teresa spends as much time as she can in support of her husband, but needs to keep working at her job as much as she can in order to pay the mortgage on their home. Family and friends launched a GoFundMe campaign to help the couple during this critical time - however; Blount’s injuries are so severe, it is not possible to provide photos of him in his present condition.

“He can kind of move his body around a little bit and nod yes or no, or squeeze your hand but he’s not speaking or anything. They have him sedated and on a bunch of pain medication,” Teresa explained, in comments published in the Cowichan Valley Citizen (9/30/15).

More ZITHROMAX SJS News
Blount is expected to recover. He’s one of the lucky ones. Many don’t. “The doctors have told us that he’ll be in ICU for at least a couple more weeks and then he’ll transfer to the plastics ward in the same hospital for rehab and whatnot, and he could be there for a few months at least - and that’s if everything goes the way it should be and there are no infections or anything,” Teresa said.

While the medical community remains at a loss as to why medication triggers SJS and TEN, as Zithromax reactions have shown in the past, the fact remains that it happens and an allergic reaction to medication is determined to be the cause. “That Thursday evening when he was in the hospital, I think it was the internal medicine doctor, he figured it was a reaction to the medication. Right from that evening they pretty much figured it out,” Teresa Blount said. “But it spread so fast…”

Many a plaintiff has launched a lawsuit alleging they were not aware of the potential for SJS and TEN delivered by the hand of a seemingly innocuous medication.