When patients were told they were receiving a Zimmer knee replacement, many thought the Zimmer NexGen Knee Replacement would last a long time and solve their knee problems. Unfortunately, certain Zimmer knee implants have been linked to problems, including failure of the knee requiring revision surgery, resulting in hundreds of lawsuits being filed. 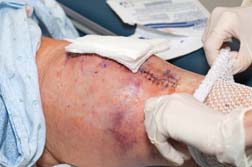 Patients and doctors typically expect joint replacements to last years after the implant surgery takes place, but according to some reports, certain Zimmer knee implants are not lasting nearly as long as they should, and that early failure rate has resulted in pain, lost wages and revision surgery for some patients.

The Zimmer NexGen CR-Flex was marketed as being superior to other knee implants because it was designed to give patients a larger range of motion than the original NexGen. The NexGen CR-Flex comes in both a cemented and uncemented version (the uncemented version fuses to the bone without the aid of a bonding agent). The implants were supposed to last around 15 years, but, in some patients, failed in a year or less, after the implant failed to fuse properly to the bone.

In other cases - those involving the cemented version - the problem has been blamed on isolated debonding, in which the implant comes loose from the adhesive and bone.

Lawsuits have been filed against Zimmer, alleging the patients suffered severe pain and in some cases were forced to undergo revision surgery to replace the implant. Plaintiffs accuse Zimmer of manufacturing a defectively designed knee implant and failing to warn consumers about the risks associated with the NexGen.

More ZIMMER NEXGEN News
Patients who have pain in their knee or feel their implant may have failed can request a bone scan, which will show signs of loosening if there are problems with the device. An x-ray is not equipped to show replacement device failure.

So far, Zimmer faces approximately 800 lawsuits that have been consolidated in multidistrict litigation. Initially, 18 lawsuits were transferred to the Northern District of Illinois, but by December 26, 2010, another 775 lawsuits were added to the multidistrict litigation, according to court documents. More lawsuits are being filed. In addition to undergoing revision surgery, patients say they have missed work - and lost income - because of the pain from the knee, and because of the time required to recover from the surgery.

Zimmer multidistrict litigation is MDL No. 2272.