Patients who had the Zimmer knee replacement implanted did so believing that the implant would make their lives better, but some now say the Zimmer knee implants have made things much worse than they were before. The patients say they have suffered unbearable pain and inability to walk, even though the implant was supposed to give them back mobility in their leg. 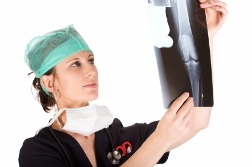 “[I] was just laid off my job due to not being able to walk some days,” writes Ben (real name withheld) to LawyersandSettlements. “This is literally ruining my life. I hurt all the time, but sometimes it is literally unbearable. Even pain meds don’t help at that point.”

More ZIMMER NEXGEN News
Patients say they suffered something called isolated debonding, in which the implant in the cemented version of the Zimmer NexGen comes loose from the bone. Ultimately, some have required revision surgery, which has meant increased medical costs, time off work and recovery time. According to researchers at the Mayo Clinic, who conducted a study (reported in The Wall Street Journal [2/6/12]), that isolated debonding was not seen in other implants used at the Mayo Clinic. Isolated debonding was reportedly blamed for 80 percent of Zimmer NexGen knee devices that came loose.

Zimmer now faces lawsuits regarding its NexGen knee replacement, alleging patients suffered early failure rates of their Zimmer knee, forcing them to endure severe pain and early revision surgery to repair the problem. In some cases, the Zimmer NexGen knee implant reportedly failed in less than a year, well under the amount of time a knee replacement is generally expected to last.

Among the allegations in various lawsuits against Zimmer are that the company knew the NexGen knee replacement could loosen and used deceptive and misleading marketing tactics to encourage health care professionals to use the Zimmer NexGen knee implant.

Zimmer multidistrict litigation is MDL No. 2272.