Huntsville, AL: Pam had a Zimmer NexGen knee replacement two years ago, and she has been suffering ever since.

“I told my surgeon that I wished he had just amputated my leg,” Pam says. 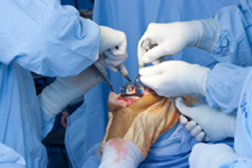 Pam, age 53, diligently went to physiotherapy for 14 weeks after the first surgery. After this amount of rehab there should have been some improvement but pain and mobility in her leg weren't getting any better.

“I couldn’t take a bath by myself,” she says, “but even worse was trying to get up from the toilet because I couldn’t bend my knee at all. We had to put a rail on the bathroom wall so I could stand.”

Pam complained to her doctor about the Zimmer knee but he told her to be patient and that it takes time to heal. But Pam knew this wasn’t the case. She decided to be pro-active and find another orthopedic surgeon.

“My current surgeon evaluated the problem, tightened up the hardware and removed some scar tissue,” Pam explains. “It helped somewhat but even with another round of physiotherapy, I couldn’t bend my knee. Instead, my kneecap would pop over to the outside of my leg. My physiotherapist would pull my kneecap into place with medical tape so I could continue the therapy.

“I knew something was wrong with the knee because the longer I went to therapy, the worse it got. I couldn’t bend it above 90 degrees. It was my therapist who urged me to call the surgeon again.”

Several months went by before Pam’s surgeon determined that she needed a complete knee replacement. He didn’t come right out and say that the Zimmer knee was defective, but Pam later found out that it was on the Zimmer recall list.

“My surgeon explained that the patella was not lined up with the knee and that it had either slipped out or who knows; he didn’t give an exact reason,” she adds. “When he took out the device, he found a bacterial infection so I was sent home with nothing in my knee but a spacer,” Pam says. “I was also sent home with a PIC line and a nurse, who came by every day with IV antibiotics for the next six weeks.” During that time, Pam was either confined to her bed or in a wheelchair. She led a fairly active life pre-knee replacement…

This past April, Pam had a DePuy knee implanted. This device is metal with plastic, rather than the Zimmer metal-on-metal knee. After another 14 weeks of therapy she is still using a walker to get around and still has a problem trying to stand up after sitting for any length of time.

“This knee replacement has changed my life forever,” Pam says. “I can’t walk with my kids, I can’t play outside with my grandkids - I’m pretty much housebound.”

A few days ago, Pam drove two miles to Walmart by herself. She almost collapsed with pain in the store and by the time she got home, the top of her leg had almost tripled in size. She popped a painkiller and waited for the pain to subside.

More ZIMMER NEXGEN News
“I take Loratab [a combination of acetaminophen and hydrocodone] every morning before I get out of bed and my doctor also put me on antidepressants,” Pam says. “I’ve never in my life taken antidepressants - I’m at my wit’s end with this knee.

“Right from the get-go, if that first doctor listened to me, I wouldn’t have gotten that infection. I thought about filing a medical malpractice lawsuit but people have told me it is hard to prove, but this defective knee isn’t hard to prove so I’m pursuing a Zimmer NexGen lawsuit. I’ve also had lots of time to read up on defective Zimmer knee recalls and horror stories - I’m one of those horror stories.”
READ ABOUT ZIMMER NEXGEN LAWSUITS

Posted by
Dean
on March 24, 2016
I really feel for these people with knee replacement problems, I also asked my surgeon about amputation, and I had to have a new knee replacement second one in four years,it has not only effected me physically but depression has set in. I hope all of you find relief. Does any one know where they are with lawsuit
Posted by
Chase Carrera-Cruz
on March 21, 2016
So am I! From mountain climbing athlete and shark diver to a house-bound, 100% disabled cage-diving with white sharks want-to-be. But not for awhile - I sincerely hope that you find pain-free peace and mobility and a very large check from Zimmer.