Twelve years working and walking for the Post Office took its toll on Carol's knees. She had a Zimmer NexGen knee replacement in 2005, but it did nothing to alleviate the constant pain. So last year she had revision surgery. "All that did was add more pain and now I'm on pain patches and Percocet," she says. 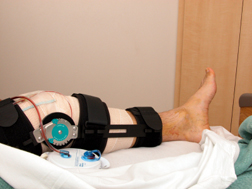 "I believe that patients who are suffering from Zimmer knees are not going back to the same doctor, so these problems are greatly under-reported," adds Carol, age 50. Five years after her knee surgery, Carol had a "small Zimmer plastic implant" attached to the cup of her metal-on-metal knee replacement, hoping the revision surgery would add more stability and tighten the entire implant. "My surgeon was prepared to replace the whole knee in 2010, but when I was under anesthesia, he chose to just attach the little plastic piece. I wish he had taken the entire Zimmer NexGen knee out." According to Carol, she needed the revision surgery because her implant was loose…

"I have gone through all this pain and now there is a recall. My first surgeon said that my knee isn't in the recall: apparently there are certain serial numbers. But if I don't get this fixed now, at some future date will I have to pay for it?

"I was off work for four months (on Workers Compensation) and went through several months of physical therapy," says Carol. "I did everything the doctors recommended, but now my pain medication barely controls the pain. And I take Ambien so I can sleep at night. I was in perfect health until I had this Zimmer knee. I walked seven miles a day and now I have a desk job.

"If I could do this all over again, I would never have had that first knee surgery. Instead I would have changed my job and taken a driving route. Having the surgeon cut into my knee and give me this replacement was the worst thing that could have happened.

More ZIMMER NEXGEN News
"When I told my family doctor that there are a lot of Zimmer NexGen lawsuits, he said that Zimmer is the best product out there and he doesn't think there is anything wrong with it. He just throws up his hands. And the surgeon who did my revision surgery can't explain why I am in so much pain, yet he continues to write pain meds for me. I continually have x-rays and he just says, 'Sorry Carol that you are in so much pain.' And he continues to do implants with Zimmer NexGen.

"My surgeon told me that the Zimmer NexGen failure rate is miniscule and he showed me the data Zimmer sent him, which isn't the same as the research I have read online. My ultimate goal is to have enough money from a lawsuit to have any doctor I want to take this one out, put a brand-new knee in, and start from scratch.

"I would really like to get this fixed so I can get some kind of a normal life back. I know I won't be able to go back to being a letter carrier, but if I can't stand for any length of time I might have to get some disability job. I know life sometimes isn't fair but this shouldn't have happened."