Vitamin E May Be Coming to Zimmer Implants. For Better or Worse?

It's been about two years since Zimmer triumphantly announced its upcoming 25th anniversary since the first implantation of its Zimmer Natural Knee product in 1985. And while thousands of patients have experienced good results with the product—designed to more effectively mirror the natural movement and function of a human knee—it has not proven a worthwhile decision for everyone. 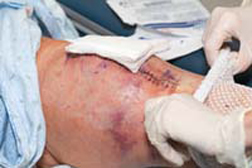 One patient who opted to go Zimmer Natural in February last year has noted in a submission to LawyersandSettlements.com that "since my surgery I am not able to function as well as I should be," writes the resident of New York. "It has been a year and I am in acute pain and not able to perform daily tasks. The pain has caused my life to change drastically."

This, just about a year after initial surgery.

There are other examples of patients for whom the Zimmer knee product and/or Zimmer Natural hip have proven less than stellar. Some have required revision surgery to replace a failed device. Others, who either can't afford further surgery or can ill afford time off work, simply live with the pain.

One patient who received an allegedly defective Zimmer natural knee product complained of pain and suffering stemming from eight surgical procedures on the knee since July 2009. That patient can no longer work.

However, it appears as though there can always be improvement in that area. Witness Zimmer's interest in a process utilized by a competitor to infuse polyethylene and plastic components with Vitamin E to ward against degradation of plastic components.

According to the Naples Daily News (2/20/12), Zimmer is seeking approval from the US Food and Drug Administration (FDA) to infuse its implants and medical devices with Vitamin E.

According to the report, Zimmer has applied to the FDA for Vitamin E infusion of the cup liner only. The infusion is believed to make the material denser, thereby increasing its capacity for handling stress.

More ZIMMER NATURAL News
Approval for the change, which will presumably affect Zimmer Natural Knee II as well as other Zimmer knee and hip products using a polyethylene liner in a cup, is expected within the next year.

Even though the proposal constitutes a change in the design (however minor) to the Zimmer Natural knee system, it is expected the FDA will not require extensive testing according to the agency's policy advocating a fast track to market for devices which are substantially similar to that which is already available—criteria against which Zimmer Natural certainly qualifies. As a result, patients of Zimmer Natural Knee with the pending Vitamin E infusion, once approved, will serve as guinea pigs inherent to the increased density of the polyethylene liner, in the absence of clinical trials.