Don. K knows first-hand the pain of a Zimmer Hip replacement gone wrong. He had a Zimmer Durom Cup implanted in his hip that required replacing shortly after his original surgery. Although his hip is much better now, Don faced months of pain, repeated surgeries and time off work to deal with complications from his Zimmer Durom hip implant. 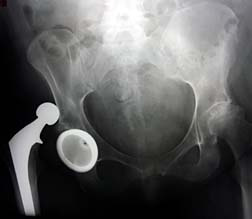 "I went in for my surgery about the third week of March [2008] to have my hip replaced," Don says. "I got out of hospital about 2 days later and went home. I was doing great for about 2 weeks. Then, when I was getting out of the car, I felt something in my hip. I didn't pay a lot of attention then, I just said, 'Well, I won't do that again.' But the next week I called the doctor because the hip started bothering me.

"The hip doctor took an x-ray and said the hip was okay. This went on for a total of 16 weeks. I was having some pain and I tried to go back to work but I couldn't do it, so I had to give up work again. I went to see the doctor on 2 other occasions and both times he took x-rays and I guess he couldn't see anything wrong.

"Then, I went to see my regular doctor because I wasn't happy—I was hurting too much. I asked about getting it checked out, so the doctor scheduled an x-ray and bone scan at the hospital. The next day, I saw the hip doctor again and he took another x-ray so that I would have a copy to take to my regular doctor. He took the x-ray and left. When he came back, he said, 'We have a problem.' I said, 'No kidding. I've been saying that for 16 weeks.' Turns out, he talked to some doctors out west who told him about problems with the hip replacements and he determined that I was having the same problem.

"I asked what could be done and he said they would have to go back into my hip and take that one and put another in. The surgery was scheduled for a week later and by 2 days before the surgery, I couldn't walk—I crawled from my car to the house."

Don's second surgery was in July, 2008. Along with the pain and increased recovery time associated with a second major surgery comes the increased risk of infections and other complications from the surgery. During his second hip replacement surgery, Don developed a staph infection. Following his stay in the hospital, Don was required to go to a specialist every day for 6 weeks to receive an IV antibiotic.

More ZIMMER HIP News
Prior to his second surgery, Don says he was in extreme pain that came and went and the longer the problem went on the more frequently the pain came. He had difficulty walking and problems sitting for any significant length of time. Don was required to take time off work between the surgeries because his job, moving rental cars for Avis, involved a lot of sitting and driving.

"The new hip now, other than sore muscles and stuff, seems to be doing okay," Don says. "You know, the first time I went to rehab after getting out of the hospital, I was going 3 days a week. By the third week, the person there said there was no sense in me coming back until the doctor could find out what was giving me so much pain.

"The thing that was really disturbing to me was the length of time between when I said I was hurt and when they did something. Sixteen weeks is a long time, especially in pain."