As if it weren't bad enough that patients who had Zimmer hip replacements had to go through one surgery to have their hip replaced with Zimmer Durom cups, now they're being told that the cups may be defective. Of course, many of those patients probably already guessed there was a problem with the Zimmer cups, since they have suffered agonizing pain ever since their hip replacement surgeries, but that does not make the news any easier to digest—after all, they have to go through more surgeries to have the hips replaced again, costing time and money and causing further pain. 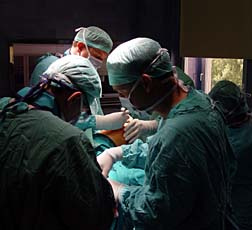 A hip replacement surgery is supposed to be life changing for the better, not the worse. People who undergo these major surgeries do so because they have extreme pain in their hips and limited mobility. Some cannot walk with out the aid of a cane or walker, while others cannot walk at all. Let down by their body, these patients seek medical help and are told that a hip replacement is what they need.

The hip replacement is meant to give them their life back—to allow them to walk and move around without pain. Unfortunately, that is not what has happened for every patient. Some received allegedly defective hip replacement parts and they say they are in more pain now than they were before the surgery.

How bad is the problem? Very painful, according to Marjorie R. "The hip socket failed—literally falling out of my pelvis—and I had not only agony and a severely damaged pelvic bone but also a second surgery." She goes on to note the effect that this problem has had on her life, saying it has cost her, "A staggering amount of time, expense, agonizing pain, inability to do my day job, and all the perils (blood clots and the like) of major surgery twice because of the failed Zimmer Durom socket."

Janie H. says she has also had serious problems since her hip surgery. "I am not able to walk like I used to. I cannot lie on that side when I sleep. I have a terrible limp and I am in constant pain every waking hour. I have taken every pain killer on the market, tried every method to stop the pain—yet nothing works. Now I am scheduled to go back next month to have the metal taken out and replaced with plastic. What a horrible life I have been living since January 2007."

A defective hip product is not like a defective coffee maker—you can't just unplug it and take it back to the manufacturer. Patients and their doctors have to weigh the risks of undergoing another major surgery with the amount of pain and discomfort the patient experiences. If they do have another hip replacement, patients then face longer recovery times, further rehabilitation on their hips and time off work. Keep in mind, this is all for something that was supposed to make life better—these patients already suffered pain when their hips first started to fail. They don't need to go through that again.
I have seen how serious hip replacement surgery can be. My mother had to have both hips replaced in 2 separate surgeries last year. The surgeries were approximately 3 months apart and both required at least 6 weeks of physical therapy. For the first while after her surgeries, she had to sleep sitting up in a chair because she could not lie down and she had extremely limited mobility. By about a year following the surgeries, she was able to get rid of both her walker and her cane.

While writing about Zimmer hip replacements, I have often thought about what my mother would go through if she had to have the hips replaced again because of a defect. I cannot imagine the toll it would take on her, to have to go back into the hospital, to redo physical therapy and once again go through recovery, not to mention missing close to 6 months of work—all because of a defective medical product, not because of anything she had control over.

The other thing that often crosses my mind is that the cause of my mother's hip failure is a genetic problem—one that I could be prone to. I can only hope that by the time I have to face hip replacement surgery, Zimmer and other hip replacement companies will have worked all the defects out of their products.