A new Senate bill proposed by a small handful of legislators attempts to improve oversight and the tracking of potentially problematic medical devices after they have been surgically implanted in patients. Zimmer hip implant is one of the devices the legislators had in mind when the Bill was crafted. 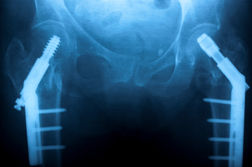 However, as much as the proposal has the potential to marginally improve on the existing capacity for device manufacturers to fast-track "substantially similar" products to market with the complete blessing of the US Food and Drug Administration (FDA), the Bill will be of little help to people like Theresa Brammer, who has suffered through three surgical procedures between May 2008 and April of this year.

Brammer alleges in a Zimmer hip lawsuit that the Zimmer Durom Cup metal-on-metal implant, which she received in May 2008, failed to properly fuse to her bone. The resulting failure caused much pain and suffering, and required costly revision surgery in January of this year, with a subsequent procedure just three months later.

The three legislators, apparently, have little hope in reversing current features in FDA regulations that allow medical device manufacturers, including Zimmer Inc., a pass on undertaking rigorous testing so long as the new device is substantially similar to products already on the market.

Advocates of the fast-track cite the ability to get needed products and medical advancements to patients faster, while critics of the 510(k) clause make the point that such a system may be good for industry and commerce, what of the patient? What's more, a second-generation device might be "substantially similar" to an approved first-generation device. However, subsequent generations of devices deemed "substantially similar" to the device that immediately precedes it, suddenly has little resemblance to the original device upon which the plethora of similar devices was based in the first place.

In spite of the critics, The New York Times reported on December 15 that the three legislators—two Democrats and one Republican—have an uphill battle on their hands just to require the FDA to mandate an after-market tracking system for medical devices like the Zimmer Durom Cup hip replacement. As it is, according to the report, the proposed Bill would not require the need for pre-market testing of medical devices, "substantially similar" or not.

Indeed, a set of bills backed by the medical device industry seeks to speed up the fast-track approval process even further—to the detriment of patients, critics claim.

More ZIMMER DUROM CUP News
As it is, a spokesperson for the Advanced Medical Technology Association noted that studies have shown the current fast-track approval process as required under the FDA 501(k) guidelines as "remarkably safe."

Don't tell that to Ohio's Theresa Brammer. Instead of receiving an artificial hip that was supposed to last upwards of 15 years or more, Brammer required revision surgery a little over two years after receiving the problematic Durom Cup. She has launched a Zimmer hip lawsuit as a result.

The sponsors of the proposed legislation sent communiqués to five of the biggest medical device manufacturers, seeking documentation as to how the companies track product safety and, when necessary, recall devices. Zimmer Inc., identified by the Boston Globe on December 21 as the world's largest manufacturer of artificial hip and knee joints, was one of manufacturers contacted.