"I Use My Zimmer Hip Bits As Paperweights"

"I have these Zimmer parts in a drawer and I use the balls for paperweights," says Ed, laughing. But his five hip revision surgeries are no laughing matter. "From all these hip replacement surgeries, I figure at least one is defective." 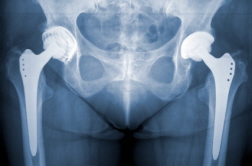 "Usually when they replace a hip, they just replace the ball and not the socket. These medical devices are expensive so I've always asked the surgeon if I can keep them. That's how I've wound up with these Zimmer paperweights! That's about all they are good for, but I doubt that I can sell 'em on Craigslist."

Ed, who had his first hip replacement in 1999, doesn't know the exact hip replacement models he was given, but he does know that the last two were made by Zimmer—he has the orthopedic surgeon's report. "I believe one is called the Zimmer Trilogy, but I'm going to see my doctor next week, as advised by your [LawyersandSettlements] attorney; with the amount of pain I've had, I wouldn't doubt that this one is the Durom cup Zimmer hip. "The Durom Cup was recalled in 2008—albeit temporarily, but the Trilogy has not been recalled. Yet.

Ed, age 75, has experienced six hip dislocations since his original hip replacement. "I've had a rough time with these implants since the beginning, " he adds. "I know these last two Zimmer hips were put in correctly and I know my orthopedic surgeon is great; it is definitely not his fault. But I have no idea if they were the wrong hips. My last hip revision surgery was totally my fault because I fell off a ladder, but I've had more pain after this surgery than ever before, which leads me to believe that this Zimmer hip could be a defective device.

More ZIMMER DUROM CUP News
"When one of these devices dislocates, it's a bad scene. I am 6' 6" and when I go down, look out. And the pain is unbelievable. I have to go to ER to get it fixed. By the time they pick me up and get me to the hospital, it's pretty bad. It takes two guys to literally sit on top of me while another guy pulls my leg to get it back into its socket. Believe me, I can't go into much detail because I'm not paying much attention at the time, all I can see is pain. So far this has happened six times, through all these different hip replacements. As you can imagine, I'm dreading it happening again.

"Typically, the orthopedic surgeons and the physiotherapists tell you not to bend over too far but these dislocations happened when I got out of bed or got out of a chair! They tell me not to be so active, but I had this type of hip because I am active! I love fishing but what if this happens when I'm by myself in my boat, out on the briny blue? I spend all my time on the water so this Zimmer hip has definitely affected my quality of life and it has caused me to slow down."